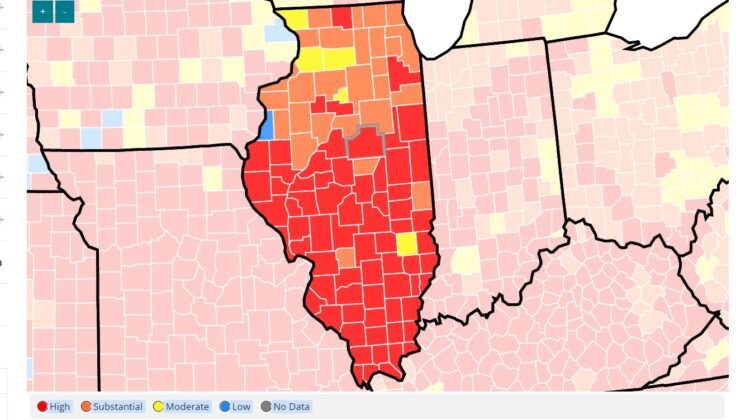 The federal Centers for Disease Control Tuesday issued a new order blocking evictions in areas with substantial or high levels of COVID-19 infections through Oct. 3.

The ruling is said to apply to roughly 90% of the nation’s population and includes Cook County and all the other counties in the immediate Chicago area. Only six counties in the state have COVID levels considered moderate or low. All the others have substantial or high transmission rates according to CDC calculations.

Cook County officials Monday unveiled a program to encourage landlords and tenants to use mediation services to resolve disputes over unpaid rent, rather than going through the eviction process, after state and federal bans on evictions during the pandemic ran out over the weekend.

The new CDC announcement was something of a reversal for the Biden administration, which had previously said that a Supreme Court ruling prevented extending the moratorium. Progressive lawmakers had been pushing the White House to do more to prevent millions of Americans from losing their homes during the pandemic.

The CDC said it had determined that it had the legal authority to issue the new moratorium, based on its targeting only areas with substantial and high levels of COVID-19 infections, rather than the entire country.

In a statement, CDC Director Dr. Rochelle Walensky said, “This moratorium is the right thing to do to keep people in their homes and out of congregate settings where COVID-19 spreads,” adding that “mass evictions and the attendant public health consequences would be very difficult to reverse.”

Update 8/4/21: The anticipated flood of evictions in our area did not take place during the brief window when the eviction moratorium was lifted.

A spokesperson for Chief Judge Tim Evans of the Cook County Circuit Court, says 45 evictions were filed on Aug. 2 in the City of Chicago. Forty-two were residential, three were commercial.

In the Cook County suburbs, only eight were filed, all residential. The numbers are not broken down by suburb, so we do not know if any of those eight were in Evanston.

Evanston health officials reported eight new COVID cases in the city Tuesday. The seven-day-average case count now stands at at 5.4. That’s the highest its been since mid-May and more than twice the 2.1 level it was on this date a year ago.

The city says 78.6% of Evanston residents 12 and older now have been fully vaccinated and 85% have received at least one vaccine dose.

Masks will be required regardless of vaccination status except when in a private room or actively eating or drinking. The announcement added that faculty who are fully vaccinated and who are teaching in-person may do so without a mask, provided they maintain appropriate social distancing.

The announcement from NU Vice President for Operations Luke Figora said the school has only seen “a slight increase” in cases over the past few weeks. Some of those cases have occurred in fully vaccinated individuals, Figora said, but “thankfully those individual have had only minor symptoms.”

Figora says nearly 30,000 students, faculty and staff have reported that they are vaccinated, ahead of the imposition of vaccination requirements for the school’s fall term.