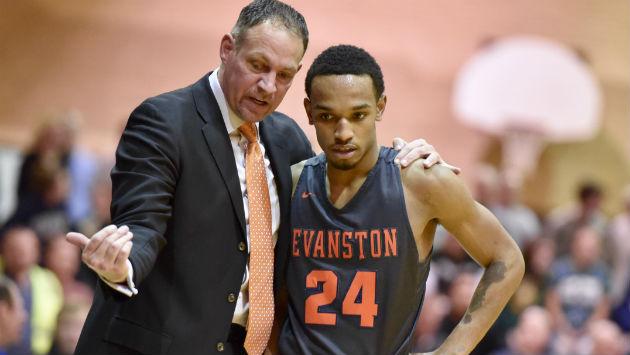 After leading the Peoria Richwoods basketball program to the state championship game in both 2006 and 2010, Mike Ellis certainly can be considered an authority on what it takes to get to the next level.

And when asked about the upcoming 2018-19 season, with four returning starters from a team that won 27 games and crashed the Final Four last year, the Evanston coach didn’t dodge one basic question.

“Is this Wildkit team capable of winning a state championship?”

“Yeah, I’d say they are. Put it this way, I wouldn’t be shocked and awed to see it happen,” said the veteran coach after the Wildkits wrapped up their preseason practices in preparation for the season opener Tuesday versus Conant at the Saint Viator Thanksgiving Tournament. “But we’re not calling our shot or anything like that. We have a lot of work to do before we get to that point.

“We have to remember that we can’t rely just on what we did last year (27-6 overall, 3rd in Class 4A state tournament, Central Suburban League South division champions). Last year doesn’t really mean anything, because I’ve never seen things stay the same two years in a row. And even though we answered a lot of challenges last year, there are all new challenges ahead of us this year. It will really depend on how hard we play, how smart we play, and how well we play together.”

Coaches always worry about complacency when a young team enjoys success and that’s one of the issues confronting Ellis and his staff this winter.

“Sophomore year, these seniors (returning starters Lance Jones, Jaheim Holden, Ryan Bost) got to the super-sectional and they saw what it was like,” the coach pointed out. “Then junior year they made a nice run to State. So now that it’s their senior year, you’re fighting a sense of entitlement that getting to State again is SUPPOSED to happen. That’s not the way high school sports works.

“This year we’ll be the team that everyone circles on their schedule. We’ll have a target on our backs and it’s not like last year when we were picked to finish fourth in our conference. Nobody circles their schedule for a team that’s picked fourth, and I’d rather be the underdog like that.”

No chance of that happening, with all-conference guards Jones (15.3 points per game) and Holden (14.4 ppg) joining Bost and sophomore Blake Peters (10.5 ppg) in the starting lineup again. The Wildkits are ranked No. 2 in the Chicago area by one publication and got a further boost with the arrival of 6-foot-5 import Louis Lesmond, a sophomore who was a member of the Under 16 national team in France before relocating to Evanston.

ETHS must replace its only graduated starter, 6-5 post player Matt Hall, and will again present a four-guard attack that will display more firepower outside than inside. The Wildkits faced the same lack of size issue a year ago but were only outrebounded by their opponents 1044-1005 over 33 games.

As a team, the Kits connected on 32.5 percent of their 3-point field goal attempts and Ellis believes they’ll be even more efficient this time around, especially with the addition of Lesmond to the mix.

Peters showed the way from deep a year ago with 79 treys, sinking them at a more-than-respectable 38 percent pace. He’s coming off an end-of-summer performance where he connected on seven 3-point baskets in an 87-80 shootout loss to defending state Class 3A champion Morgan Park at the West Aurora tournament.

Of course, the 6-foot-1 sophomore will always be known for his last-second, 80-foot shot to beat Maine South in Beardsley Gym, a shot that went viral and helped propel ETHS to the conference title.

“We’ll put up our fair share of 3-pointers as a team, similar to (NBA powerhouse) Golden State,” Ellis acknowledged. “We have a bunch of confidence in one another as 3-point shooters.

“I can promise you that Blake Peters is not going to be known only for that one shot in his career here. That’s just a small sample of what he’s going to bring to the Evanston basketball program.”

Jones, who emerged as one of the state’s top point guards by the end of last season, returns to lead on both sides of the ball after committing to play his college ball at Southern Illinois University in Carbondale. But he suffered a concussion during an open gym session and has missed an entire month of training camp, so his status for the Thanksgiving tournament is doubtful.

Senior guard Jaheim Holden is one of four returning starters for Evanston’s basketball team this season.

Bost has been bothered by a knee problem and his playing time could also be limited. Another senior, forward Ben Tarpey, is still on the mend from a concussion and a hand injury he suffered in Evanston’s football playoff loss to Edwardsville.

6-3 sophomore Jaylin Gibson played big all of last year, especially in the second half of the season when he stepped up and guarded opponents’ “bigs” in relief of Hall. His ability to defend in both the backcourt and frontcourt underlines the versatility shown by most of Evanston’s starters to date.

Ellis expects him to pick up some slack on offense, too.

“Jaylin’s improvement has really been impressive,” Ellis praised. “He and Lance are our MVPs because they can play so many positions. A couple of flexible players like that can really make your team go. They can guard anyone on the floor, and Jaylin is our most improved 3-point shooter. He’s been knocking them in all during training camp.”

It didn’t seem possible that Ellis could have made the team’s schedule any more difficult than it’s been the past couple of seasons, until the veteran coach decided to enter the school in not one — but TWO — Christmas tournaments. The Wildkits could play as many as 8 games from December 19 to December 29 in the King of the Bluegrass tourney in Louisville (Ky.) and the Centralia Holiday Tournament.

They’ll only get two days off in between southern trips. The return trip to Louisville was a late addition to the schedule and Ellis felt he couldn’t say no after the Wildkits placed fifth there three years ago.

“We had a great experience the last time we went to Kentucky, even though we left feeling like we didn’t play up to our capability as a team,” said the ETHS coach. “It’s an opportunity now to show the people down there what Evanston basketball is all about, and the fact that the IHSA (Illinois High School Association) expanded the schedules to a flat 30 games (instead of differentiating between number of tournaments entered plus regular season contests) is what allowed us to do this.

“Our schedule in December is really loaded. When 2018 ends, we’ll have a good idea of what’s been successful for us up until then, and what we need to do to have more success in 2019.”