Evanston City Manager Wally Bobkiewicz Tuesday night unveiled a new campaign designed to acquaint bicyclists with the city's bike rules — and the sample posters he handed out just might turn out to be collectibles. 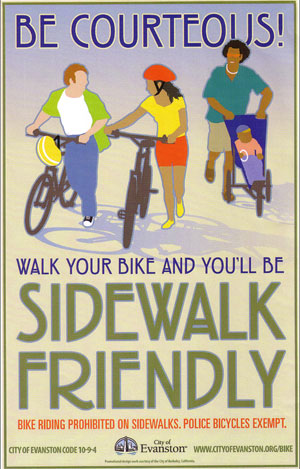 That's because the versions of the poster distributed at the 1st Ward meeting at the downtown library misstate the city ordinance upon which the campaign is based.

The poster also states that the code section exempts police bicycles from the sidewalk-riding ban, when that section of the code contains no such exemption.

After Evanston Now reported the discrepancies this morning, the city manager called to say they'd be fixed, to eliminate the reference to police bikes and specify that bike riding is only prohibited on sidewalks "in designated areas."

Bobkiewicz said at the 1st Ward meeting Tuesday night where he announced the program that the city was able to get the poster design — and designs for sidewalk stencils and other materials for the campaign — for free from the city of Berkeley, Calif., where he's friends with the city manager.

He also noted that the campaign poster itself was designed for Berkeley by a graduate of Northwestern University's Medill School of Journalism.

The errant phrasing apparently was carried over from Berkeley's version of the poster.

Bobkiewicz says the mistake won't leave the city stuck with a lot of copies of the incorrect poster. "The samples I handed out last night were the only ones I had," he said, noting that the city has no budget to pay for printing for the campaign and is only producing the posters as needed in house.

Meanwhile this week the City of Chicago started construction of its first "protected bicycle lane" that separates bicycles from cars on a street, a concept that hasn't yet migrated to Evanston.

The biking section of Evanston's city website does include a bike map showing bike routes through the city, but it fails to note the areas in which bike riding on city sidewalks is prohibitied.

Next week is Bike to Work Week in the Chicago area and a celebration is planned for Friday morning, June 17, at Fountain Square.