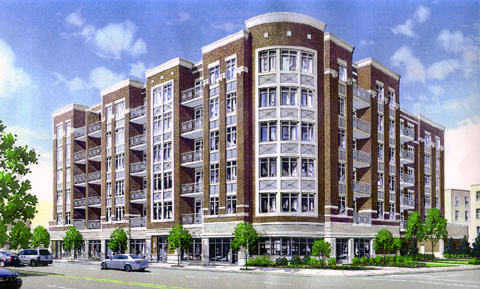 A developer plans a six-story condo building for the site of an auto dealership at 1001 Chicago Ave.

A rendering of the 1001 Chicago Ave. proposal looking northeast.
In plans presented to city officials today, developer Richard Hawthorne said the planned building would include 65 condominiums, 3,300 square feet of ground-level retail space and 92 parking spaces in the basement and ground-floor levels.

The developer’s attorney, James Murray, said that at 67-feet tall the building meets the city’s height limit for the C1a commercial zone in which it’s located. The plans call for a 3.4 floor area ratio, under the 4.0 ratio allowed by the zoning.

He said the project requires review as a planned development only because it includes more units than the minimum required to trigger that review. 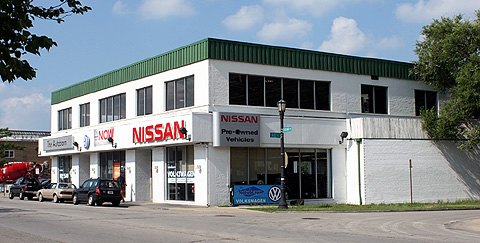 The 1001 Chicago Ave. site.
The Auto Barn car dealership that currently occupies the site on the northeast corner of Chicago Avenue and Lee Street is relocating to property further north on the same block that was recently vacated by a Toyota dealership.

The property is across Lee Street from the South Branch of the Evanston Public Library.

Alderman Melissa Wynne, in whose 3rd Ward the site is located, said she was impressed with the building’s design, saying it’s better than she had expected.

“But I don’t think the neighbors want to see another six-story building on Chicago Avenue,” she said, noting that several other properties within a few blocks of the site are expected to be proposed for redevelopment in coming months.

The developer said the building exterior will be constructed of a reddish-brown brick with off-white precast concrete trim on all four sides.

Assistant Community Development Director Carolyn Brzezinski noted that the lot line is very close to the edge of the Chicago Avenue roadway and suggested that the developer consider setting back at least the ground floor of the building to create an arcade that would provide a wider sidewalk and shelter pedestrians from rain.

Although the zoning for the property does not require such a setback, “it could be a much more successful project and be a much bigger benefit to the city with that,” she said. She added that the recently completed 900 Chicago Ave. building provides a good example of the benefits of the arcade treatment. 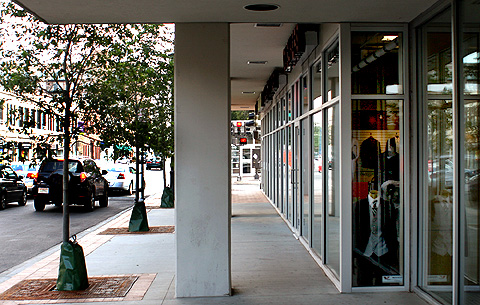 The arcade at the 900 Chicago Ave. building widens the sidewalk, but for much of its length is obstructed by large posts that support the building’s upper floors.

As a planned development, the project will require review by the Plan Commission and City Council.