Evanston was saved from what could have been a dramatic population decline during the past decade by new construction that was largely concentrated in three census tracts in and near downtown. 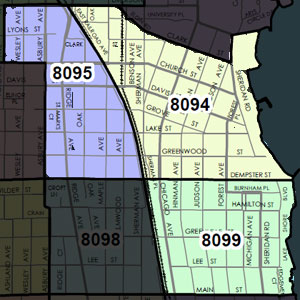 Newly released figures from the 2010 census show that the population of census tract 8094, which includes downtown east of the Metra tracks, grew 29 percent during the decade, from 4,496 to 5,804 people.

And census tract 8099, which includes the area east of the Metra tracks between Dempster and Main Streets, also a substantial amount of new construction. Its population grew 15 percent, from 2,476 to 2,855.

In all, half of Evanston's census tracts showed population increases. The other half, mostly concentrated in the west and southern portions of town, lost residents.

The biggest population declines occurred in the two census tracts hit hardest by the foreclosure crisis.