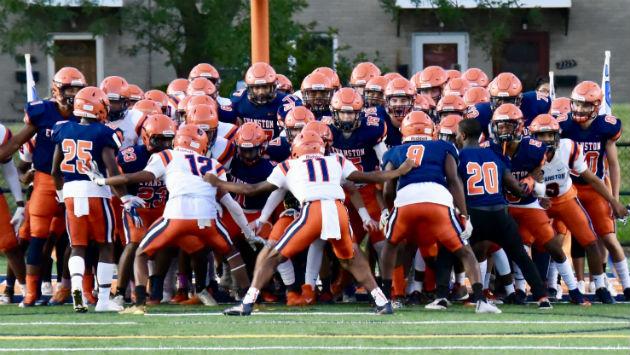 Four new opponents highlight the 2019 schedule for the Evanston football team this fall.

But that’s not all that’s new for the Wildkits.

Evanston fans will see plenty of new faces in new places as the Kits try to adjust to massive graduation losses from a 7-3 team that last year compiled the program’s best regular season record in 20 years.

ETHS head coach Mike Burzawa will turn the reins of the offense over to a sophomore — Sean Cruz, the first sophomore ever to nail down the starting quarterback job on the varsity level at the start of the season — and three other sophomores could also find their way into the starting lineup, sooner rather than later.

Growing pains will be part of the scenario for 2019, starting with the season opener Friday night at Lazier Field against Saint Patrick. Also new to the ETHS schedule are Week 2 (Lincoln-Way West) and Week 3 (Palatine) opponents, while Glenbrook North will replace Niles North in the South division of the Central Suburban League starting this fall.

While some might see the glass as half-empty — a rebuilding season at best — Burzawa and his coaching staff see the 2019 campaign as an opportunity to teach the game and watch the growth of a squad that returns only 4 starters on offense and 2 on defense.

“We will be young in terms of game experience,” Burzawa said. “And when that happens, as a coach you have to keep things simple. It’s a new experience for a lot of them, from training camp to the Orange and Blue (scrimmage) game, to the game day approach, to the mental preparation.

“It’s almost like having a puppy. You have to teach the little things along the way. We’re trying to crawl first, before we can walk. In the case of the sophomores (quarterback Cruz, linebacker Sebastian Cheeks, receiver Kamau Ransom and defensive back Mark Canon Jr.), we’re just trying to get them good at a few things before we start to expand their horizons.

“Our theme this year is just to find a way.”

The Kits will lean heavily on returning starters Zach Myers (6-foot-4, 250 pounds), junior Connor Groff (6-2, 220) and Quentin Ivory (6-4, 350) to open holes for one of the best running backs in ETHS history, senior Quadre Nicholson (6-0, 170). Groff and Myers also started on the defensive line last year and will like see heavy two-way duty again this year, although Burzawa and his assistants believe they have enough quality depth to play two different units on both sides of the ball.

The ability to two-platoon — i.e. use 11 different players on offense and defense — is the goal for just about every Class 8A program, but it rarely works out that way. But the lack of experience doesn’t mean the Kits don’t have plenty of athletes to go around.

“We should pretty much be able to two-platoon as much as we want to,” the head coach said. “Because we have so much depth, this year we’ve easily had the most efficient practices I’ve ever been a part of. We’re able to give lots of kids opportunities. It’s really been remarkable so far. It’s something we always try to do, but we’ve never been able to do it to this degree.”

Nicholson returns for his fourth varsity season and is on track to surpass 2,000 yards rushing in his career. Last season he carried 183 times for a team-high 872 yards and scored 12 touchdowns. He’s averaged exactly 5 yards per carry over his first 3 seasons and has amassed 1,687 yards on the ground, including a “cup of coffee” with the varsity as a freshman.

The senior speedster has had recruiting offers from more than 30 colleges but hasn’t decided where he’ll continue his career after graduation yet.

“Quadre is obviously a big part of this football team,” Burzawa said. “His leadership is really what we need. He’s a captain again this year and over my 12 years as coach we’ve only had a few guys who were two-year captains.

“He’s probably the top running back I’ve coached in the last 23 years. We’ve tailored our offense to him and he brings a lot of toughness to the table. He’s a pure running back who has the ability to block, to bust explosive plays and to catch the ball out of the backfield. He can do everything on the field, and we want him to have a special senior year.”

Nicholson’s presence will ease the offensive burden that Cruz would otherwise carry. But the 6-foot, 170-pound sophomore has shown during summer 7-on-7 competition and during preseason training camp that he can make all the necessary throws for a varsity quarterback, even though he played at the freshman level last year.

“We believe in Sean, but he won’t have to do it all for us. He’ll have some weapons around him,” Burzawa pointed out. “He just has to know his job, and do his job. He’s doing the little things right now, putting in time in the classroom when it comes to understanding coverages and defensive fronts, working with Coach (Ryan) Healy. He’s made some impressive throws so far and he’s extremely solid with his fundamentals.

“I think the sky’s the limit for Sean.”

Inniss has been a training camp surprise. The 5-7, 175-pounder wasn’t a primary weapon for the sophomore squad but he might emerge as a threat by the time CSL play begin.

“He was an S back with the sophomores and he’s been a huge surprise for us,” Burzawa said. “He had a great camp and he can really catch it.”

Up front on offense, Groff is switching to the center position and will line up in the middle of the attack flanked by Myers and Ivory at the tackles and juniors Jake Vogel (6-4, 280) and Josh Hartwell (6-1, 245) at the guards.

On defense, the strength of the squad could turn out to be in the defensive backfield despite the graduation of three-year starting safety Mike Axelrood. Senior co-captain Darius Hunt (6-1, 170) has the speed and ability to be a playmaker, “Muscles” Bell could be the best athlete in the program, and the Kits also got a boost when 5-9, 175-pound Elijah Smith transferred in from Waubonsie Valley.

Smith is an Evanston native who moved back into the area and earned all-conference recognition at Waubonsie as a junior. His ball skills are off the charts.