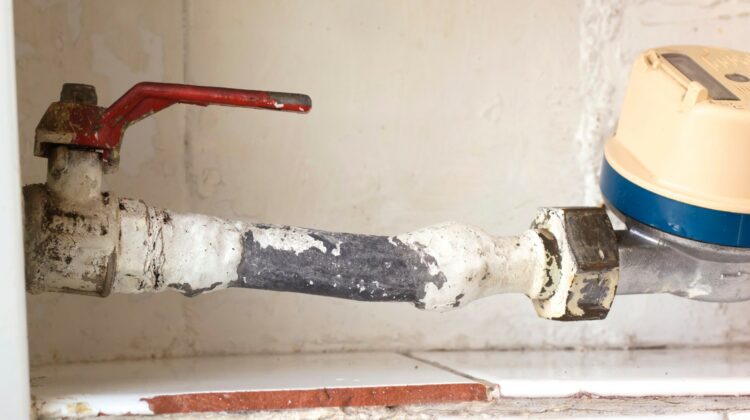 A lead water service line connected to a water meter in a home. (Shutterstock)

That may help Evanston move forward with its lead pipe replacement program, but Evanston Public Works Director Dave Stoneback says he’s not sure how much of that federal money the state may decide to provide to the city.

Evanston officials estimate the city has about 11,400 lead service lines. But our next door neighbor, Chicago, is estimated to have about 400,000 — the largest number in the nation.

A new lead line replacement law adopted by the state legislature in August puts the statewide total at 680,000.

If you assume that the funds end up being allocated in proportion to the number of lead service lines in a community, that could mean $28.5 million for Evanston.

Lead service lines were generally required in many communities until late in the last century. Their use wasn’t banned until 1986 after studies linked lead in drinking water to debilitating health problems including brain damage, especially among children.

Evanston has for years added phosphate to its water supply that helps prevent lead in service lines from leaching into tap water, but it’s not a perfect solution.

The cost of replacing a lead service line has variously been estimated at between $5,000 and $26,000.

Even if Evanston got $28.5 million from the infrastructure bill for lead line replacement, that would only cover about $2,500 of the cost of replacing each of the lead service lines in town.

Under the new state law Evanston is required to adopt a plan no later than 2024 for eliminating lead service lines. But the state law then gives the city until 2060 to finish the job of replacing those lines.

Environment groups are hoping for additional funding for lead service line replacement in disadvantaged communities will be included the president’s Build Back Better bill still under consideration in Congress.

Evanston Now requested data from the city on the distribution of lead service lines by census tract, in an effort to match that data with census tract data on race.

Stoneback said the city doesn’t have the service line data sorted by census tract, but he did provide a breakdown of the distribution of lead service lines by ward.

That shows a relatively even distribution of lead service lines across the city.

If you want to know whether your house has a lead service line, you can find out by checking the city’s water service information map.