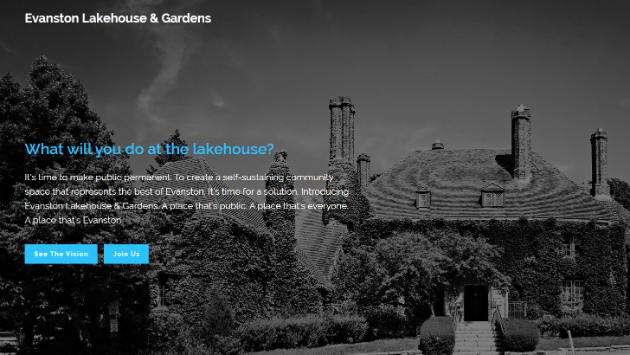 Four years after Evanston officials first considered disposing of the city-owned lakefront Harley Clarke mansion, a community group has finally started raising funds in hopes of leasing the property from the city.

Although the website presents the group as a 501(c)3 public charity, Treasurer Tom Hodgman says the group is still putting the finishing touches on its application to the Internal Revenue Service for tax-exempt status and hopes to file the paperwork this week. IRS approvals of such requests can take months.

In the meantime the group is inviting people to make pledges of contributions on the website.

The group has a seven-member board, headed by Patrick Donnelly, who presented a proposal for setting up a non-profit to operate the mansion as an event space at a public meeting held last May by the mayoral committee appointed to evaluate ideas for the property.

Hodgman says the group came together as a result of that committee process.

“We thought there were some other good examples of mansions that had been successfully converted by not-for-profits,” Hodgman says, “and that might strike the right balance for the city and community — with the city not having to pay for rehab costs, but still creating something that would be open to the public.”

The group says it has already sent email messages to several thousand residents asking for support, with a goal of raising at least $150,000 for a “capacity building fund.”

That would be followed by a $4 million fundraising campaign, under the plan.