The draft downtown plan unveiled at this morning’s Downtown Plan Committee meeting would permit a maximum height of 42 stories on Evanston’s Fountain Square block, seven stories less that the planned development now under review for the 708 Church St. site.

The draft master plan calls for replacing the current system of planned development site allowances, which under some circumstances could permit an unlimited building height, with a system of as-of-right height limits plus bonuses that developers could earn for providing specified public benefits up to a fixed ceiling for each zone.

Although the city’s consultants provided an elaborate PowerPoint presentation of the new scheme at the meeting, with three-dimensional renderings and zoning maps, the consultants and city officials refused to make printed or electronic copies of any of the documents available today.

In general the new map closely resembled one drafted during the downtown planning charrette this summer. 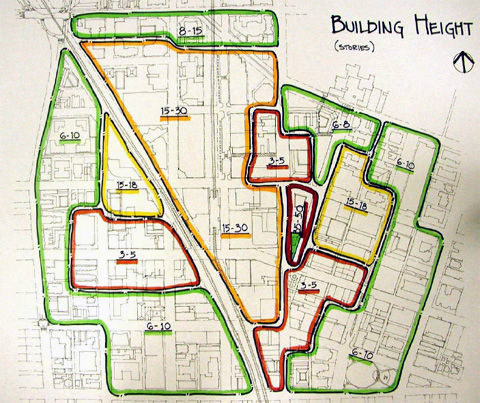 The proposal calls for three "Residential Downtown" zones at the edges of downtown. These in earlier documents were described as "transitional" zones.

The draft plan also calls for a "Downtown Traditional" zone that would be applied to various parcels along Davis Street and Sherman Avenue south of Fountain Square, to a two-block stretch of Davis Street west of the Metra tracks and to most of the Sherman Avenue block north of Church Street. Those areas would have a base height limit of 3 stories with a maximum limit of 5 stories.

The plan proposes creating the following system of bonuses by which developers could move toward the upper height limits.

The plan also requires that upper floors of taller buildings be setback from the lot line. In the downtown core, the base of buildings up to the fourth floor would be required to cover 100 percent of the lot area. From five to 15 stories the building could only cover 65 percent of the lot area, only 45 percent coverage would be allowed from there to 24 stories and only 35 percent lot coverage would be allowed to the maximum limit of 42 stories.

The schedule of public meetings about the plan includes: