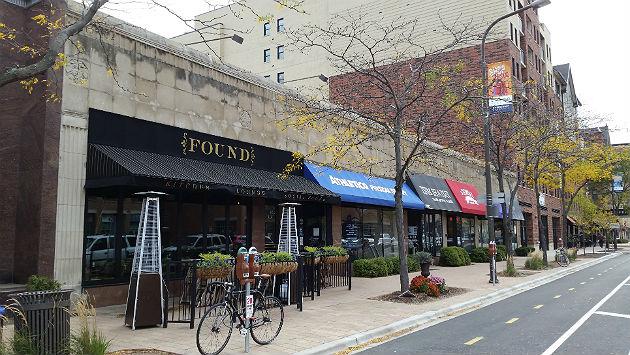 The owners of The Merion, the senior living community at 1611 Chicago Ave. in Evanston are planning a new high-rise development just to the north of their building.

He’s now scaled the plans back to 25 stories, Fiske says, “but I don’t support it at that height.”

The property is zoned D4. The city’s zoning code for the downtown area sets a base height limit for residential buildings of 105 feet in the D4 zone. With parking and planned development allowances could limit could increase to 185 feet. A greater height than that would require approval by a two-thirds vote of the City Council.

Fiske suggested the height Michael is proposing might be appropriate on the west side of Chicago Avenue, in the D3 downtown core district, but not on the east side, where it’s closer to the lakefront.

There’s already a 24 story building, the Park Evanston, on the west side of Chicago Avenue in that block.

The proposed development would have 215 apartments, 149 parking spaces and 3,691 square feet of ground floor commercial space.

A community meeting to discuss the proposed new development is scheduled for 7 p.m. on Tuesday, Oct. 24, at The Merion.

A call to Michael this morning seeking more information about the project wasn’t immediately returned.

Two other downtown high-rise projects — from Albion Residential at 1450 Sherman Ave. and from Vermilion Development at 601 Davis St. — are currently under review by the city.

Plans have been announced for a high-rise Downtown Performing Arts Center in the 1700 block of Sherman Avenue that would include a new home for Northlight Theatre as well as a hotel and apartments.

And a neighborhood meeting is on tap for this Thursday to announce plans from the Trammell Crow Company for a 17-story building at 1727 Oak Ave.