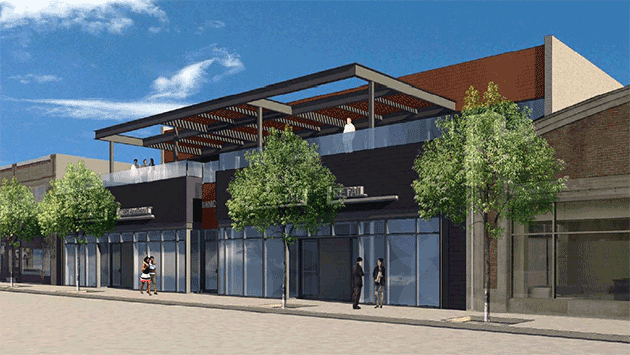 Plans for a new building to house revivals of two well-known Evanston restaurants are up for review by the city's Planning and Development Committee Monday night.

Restaurateur Daniel Kelch plans to open new versions of Lulu's, which he closed early this year, and Taco Diablo, which burned down last December, in a new building at 1026 Davis St., which would replace the Tom Thumb Hobbies & Crafts shop that's moving to Niles.

The east half of the first floor would house both restaurants, each with seating for about 60 customers and a shared kitchen.

The west half of the first floor would contain other retail shops.

The second floor would have a banquet and event space with a 15-foot wide open deck facing the street.

The plans require zoning variations because — like the existing building — the proposed new building would not provide any off-street parking.

The Zoning Board of Appeals recommended approval of the variation request on a 5-0 vote after committee members said there's plenty of parking in downtown garages and that another open parking lot wouldn't be desirable downtown.

Kelch has said that he plans to provide valet service for the event space.

The board did condition its approval on not permitting employees to park on the street and to require use of off-street parking by the valet service.

Kelch says the restaurants would operate until 10 p.m. on weeknights and midnight on weekends. He says they would have about 70 part-time employees, with three to six more for the event space.

Update 10:35 a.m. 7/15/14: The variations were approved for introduction on the City Council's consent agenda Monday night, which indicates a high probability that they'll be given final approval at the council's July 28 meeting.