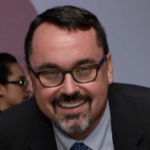 Loellbach, in a statement, said, “John is moving on to a staff position at a Chicago non-profit that will be a better fit for his particular skills and interests.”

Loellbach will work with the board, staff, and community partners to plan the future leadership of the agency and work with programs that are impacted by changes to the state budget. She will also seek to continue the momentum that Connections’ programs are gaining and its pursuit of funding to fuel that momentum.

Loellbach has been with Connections for more than 5 years as the director of development and has been responsible for all marketing and public relations, appeals, events, and the agency’s innovative volunteer program. She and her team have increased private donations to the agency by 48 percent during her tenure, compared to a 22 percent increase in private giving nationally, according to Giving USA 2014.

“I am honored to be appointed acting director by our board and eager to work with our amazing staff to increase our positive impact in our community. I hope to continue Connections’ role as an innovator and early adapter of new ideas in fighting against homelessness and poverty,” Loellbach said.