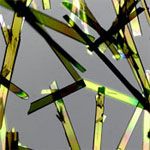 A  new class of organic materials developed at Northwestern University boasts a very attractive but elusive property: ferroelectricity. The crystalline materials also have a great memory, which could be very useful in computer and cellphone memory applications, including cloud computing.

A team of organic chemists discovered they could create very long crystals with desirable properties using just two small organic molecules that are extremely attracted to each other. The attraction between the two molecules causes them to self assemble into an ordered network — order that is needed for a material to be ferroelectric.

The starting compounds are simple and inexpensive, making the lightweight materials scalable and very promising for technology applications. In contrast, conventional ferroelectric materials — special varieties of polymers and ceramics — are complex and expensive to produce. The Northwestern materials can be made quickly and are very versatile.

In addition to computer memory, the discovery of the Northwestern materials could potentially improve sensing devices, solar energy systems and nanoelectronics. The study will be published Aug. 23 by the journal Nature.

“This work will serve as a guide for designing these materials and using ferroelectricity in new ways,” said Samuel I. Stupp, Board of Trustees Professor of Chemistry, Materials Science and Engineering, and Medicine. He is a senior author of the paper. “Our molecular design enables us to invent a nearly infinite library of ferroelectric materials.”

Ferroelectric materials exhibit spontaneous electric polarization (making one side of the material positive and the opposite side negative) that can be reversed by the application of an electric field (from a battery, for example). These two possible orientations make the materials attractive to researchers developing computer memory because one orientation could correspond to a 1 and the other to a 0. (Computer memory stores information in 1’s and 0’s.)

“The material’s behavior is complex, but the superstructure is simple,” said Sir Fraser Stoddart, Board of Trustees Professor of Chemistry in the Weinberg College of Arts and Sciences at Northwestern. He also is a senior author. “It is the superstructure that gives the material its desirable properties.”

These new supramolecular materials derive their properties from the specific interaction, repeated over and over again between two small alternating organic molecules, not from the molecules themselves. The two complementary molecules interact electronically and so strongly that they come close together and form very long crystals. This highly ordered 3-D network is based on hydrogen bonds.

In particular, the materials could help address the very expensive upkeep of cloud computing. Facebook, Google, Web-based email and other services are stored in the cloud and rely on volatile memory. When the power is turned off, volatile memory forgets the information it’s holding. So the power has to be kept on.

The new ferroelectric materials could be developed into non-volatile memory. With this type of memory, if the power is turned off, the information is retained. If the cloud and electronic devices operated on non-volatile memory, $6 billion in electricity costs would be saved in the U.S. annually, the researchers said.

As so often happens in science, serendipity played a role in this discovery of super long crystals. Shveyd was trying to make boxlike molecular rings, but this outcome was never observed. Instead, he stumbled upon the interesting crystals.

“This discovery effectively opened up a Pandora’s box,” Stoddart said. “Alex started working with Alok in Stupp’s group, and the two of them took advantage of the interactions between the two building blocks. They optimized the design so they could grow very long crystals with ferroelectric properties.”

“The interaction between the molecules is very strong — almost like a key in a lock,” Shveyd said. “They fit very well together. This interaction produces ferroelectricity, which, to our great surprise, happened at room temperature.”

This type of interaction between two molecules previously had been found to give rise to ferroelectricity in three other materials but only below liquid nitrogen temperatures. The new materials developed at Northwestern include additional interactions that enable this property to occur for the first time at room temperature and above.

The new material is all about electron exchange between two small molecules. One molecule is the donor of electrons (red), and the other is the acceptor of electrons (blue). The red and blue molecules are arranged in a mixed stack, and one type alternates with the other. Within that network, each molecule partners with a neighbor and exchanges electrons. Then an electric field is applied, prompting the molecules to switch partners, like dancers on a dance floor. This switch of partners produces ferroelectricity.

The research team developed a library of 10 complexes with this architecture. Three are reported in the Nature paper. The crystals are based on complexes between a pyromellitic diimide-acceptor and donors that are derivatives of naphthalene, pyrene and tetrathiafulvalene.

“The simplicity of our system demonstrates how self-assembly can endow materials with novel functions,” Tayi said. “We hope our work motivates chemists and engineers to explore ferroelectricity in organic materials.”

Top: An array of needle-like ferroelectric crystals viewed through an optical microscope with polarized light.