Mather LifeWays officials say they topped off construction on their new building in Evanston Thursday. 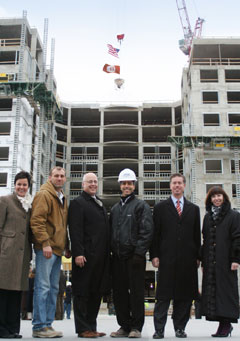 They raised a ceremonial last bucket of concrete to the top of the 11-story building to mark the occasion.

Mary Leary, Mather’s president and CEO, says construction on the building is three weeks ahead of schedule.

Assuming construction stays on track, residents will start moving into the building next fall.

The building, on the northeast corner of Davis Street and Hinman Avenue, is the first of two planned by Mather in Evanston.

The second, to be built on the Georgian Hotel site on the southeast corner of the intersection, is scheduled to be completed in 2011.

More information about the project is available on the Mather website.