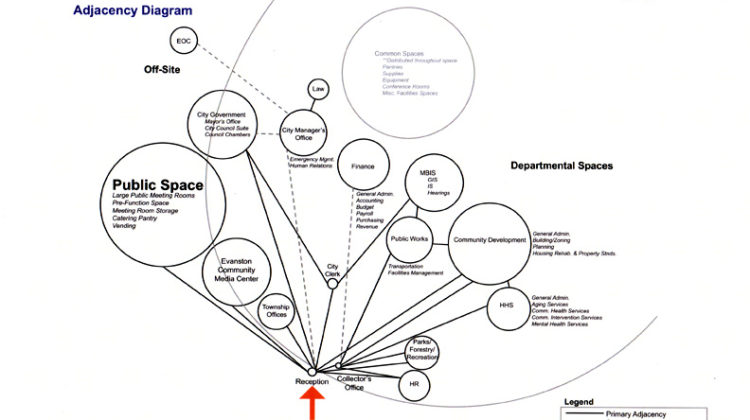 A new consultant's report concludes Evanston needs just about as much space for a new or renovatedÂ Civic Center as it now uses in the existing one.

The report from Skidmore Owings & Merrill says the city would need 78,280 square feet of office space for city functions that are now located in the Civic Center, plus another 10,165 square feet to move the township offices and the Evanston Community Media Center, now are located elsewhere in town, into a new building.

Neither figure includes building common areas, which the Skidmore report suggests could add another 23,000 to 40,000 square feet to the overall space required.

The Skidmore report also attempts to diagram which city departments need to be close to each other to get their work done efficiently and best serve the public. 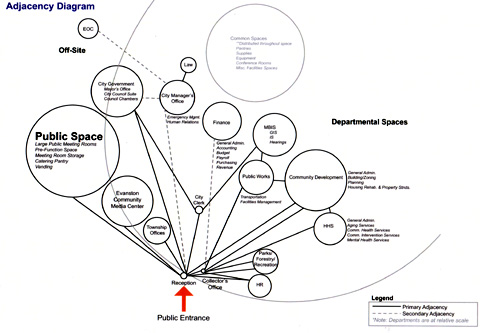 Click here for a larger version of the diagram.

The aldermen agreed, at City Manager Julia Carroll's request, to hire another consultant to take the Skidmore data and attempt to map how space might be reallocated in the existing building to achieve the report's efficiency goals.

Alderman Lionel Jean-Baptiste, 2nd Ward, noted that the aldermen have voted repeatedly to sell off the Civic Center and build on a new site, but "we haven't found another site yet, so we have to discuss renovating if we need to."

Alderman Ann Rainey, 8th Ward, said she was reluctant to consider the renovation idea because it wouldn't permit creation of a tax increment financing district to help cover the cost.

Ms. Carroll said that she and Public Works Director David Jennings had recently toured the Mallinckrodt College building at 1041 Ridge Road in Wilmette at the request of members of the Friends of the Civic Center, who have cited it as an example of a successful and relatively inexpensive renovation of an old school building, like the Civic Center.

She called it "a very nice renovation," but noted that the work there was done with the building vacant and said that there were a variety of differences between residential and commercial rehab projects that would have to be considered before the city could assess its relevance to the Civic Center.