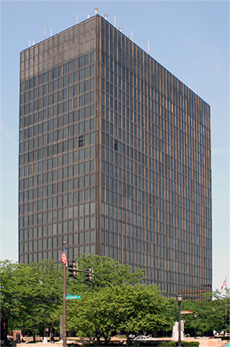 The Orrington Plaza complex, including the 20-story Chase Bank office tower at 1603 Orrington Ave., has a new owner.

Los Angeles-based Lowe Enterprises Investors announced Thursday that it has acquired the office tower and adjacent two-story retail building from Commonfund Realty and Golub & Company. Golub will continue to provide leasing and property management services for the complex.

Lowe Enterprises said in a news release that it plans to invest $4 million in improvements to the office tower, including upgrades to the plaza surrounding the building and to HVAC systems and elevators.

The tower is 95 percent leased, but about 25 percent of its space, now leased to one company, will become available early next year, which Steve Nesterak, senior vice president of Lowe Enterprises Real Estate Group called “an exellent opportunity to support expansion of existing tenants and attract new companies that previously were unable to consider an Evanston location due to the lack of large blocks of office space.”

Kathy Briscoe, executive vice president of Lowe Enterprises Investors said the retail building, vacant since 2003, “offers tremendous potential” because of recent in-fill retail and residential development downtown. “We will be evaluating options for leasing and/or redevelopment of this key piece of the complex,” she said.