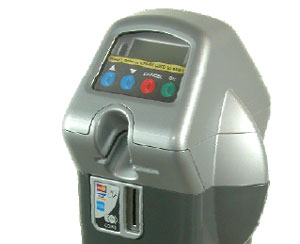 The plan would see 40 new single-space meters from IPS Group of San Diego, Calif., installed at a location yet to be determined.

Chad Randall, chief operating officer of IPS Group, told the committee that consumers tend to buy more meter time when they’re able to pay by credit card, so that cities that install the meters see up to a 25 percent increase in revenue.

Each solar-powered meter includes a cell-phone like connection to report its status to a central monitoring service, and city workers can use a web browser interface to selectively program the meters to charge different rates or offer different parking time limits at different times of day.

That feature had special appeal to committee members who’ve been wrestling with how to respond to complaints from downtown restaurant owners whose patrons have had to get up from their dinner tables to feed the existing two-hour meters since meter hours of operation were extended from 6 p.m. to 9 p.m.

The meters also report wirelessly how much money they’ve collected and whether they are experiencing any performance problems.

The meters can also be combined with a separate pavement-mounted device to monitor when cars pull out of a parking space and zero out the remaining meter time.

They still accept coins for payment and can also take payment by cell phone.

Randall said that, because the system reuses existing meter housings, it can cost half as much to install as the multi-space pay-and-display meter systems the city has also been considering.

The meters cost $400 to $500 each and the firm charges a $5 monthly fee for each meter for the monitoring system.

But he claimed that, because of increased usage, cities that install the new meters still see a net increase in revenue.