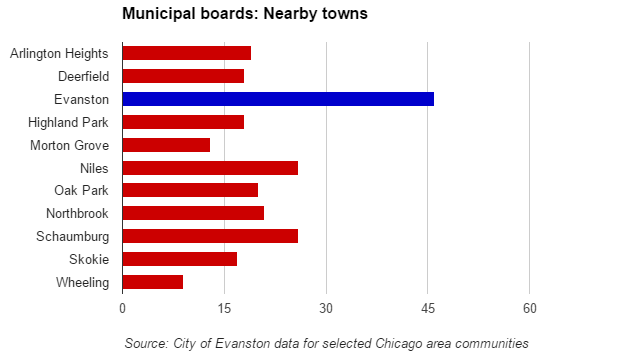 Evanston aldermen Monday will consider a new scheme for cutting the number of boards, committees and commissions that advise the City Council — one that could trim their number by roughly 40 percent.

As shown in the chart above, Evanston now has more than twice as many advisory panels as many other towns in the area. It also has many more than the average for similar college towns.

Under the proposal to be presented to the City Councl’s Rules Commitee:

Twenty-one other committees would remain unchanged under the plan.

The current high number of committees is seen to create difficulties finding enough people to serve on the panels and to leave some of them with too little work to do to keep the participants engaged. It’s also created difficulties for aldermen and the public to stay informed about what all the committees are up to.

But so far, despite a decade of studies and efforts to trim the committee count, only two committees have been eliminated from the roster in recent years.