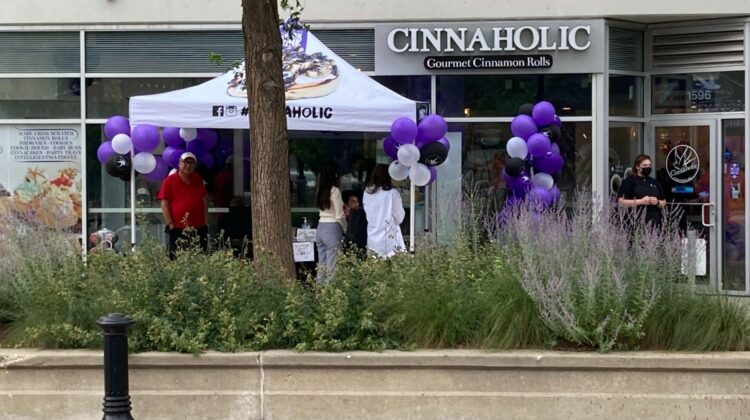 The pent-up demand for vegan cinnamon buns was unleashed full force this morning in Evanston.

Cinnaholic, an Atlanta-based franchise chain, opened a bakery on Sherman Avenue, in the former site of Freshii fruit and salad eatery. There was a line waiting to get in.

A block away, also on Sherman, in the closed Bar Louie location, the owner of the new Ridgeville Tavern was putting on the finishing touches for an expected opening next week.

And next to Ridgeville, on Grove Street, work is underway on a “pour your own” bar and restaurant called Tapville Social, which will take the spot of Bangers and Lace later this fall.

It’s an exciting time after 18 months of COVID-related shutdowns, outdoor dining only, and staffing shortages which decimated the hospitality industry.

Ike Robertson, Ridgeville Tavern’s owner, had hoped to open sooner, but the pandemic led to delays. “But here we are, getting ready to open,” he says.

Robertson says he is “cautiously optimistic. Things are okay right now,” he says, “but they’re not going in the right direction” with COVID cases increasing.

“We’ll deal with that as it happens,” he adds.

At Cinnaholic, the sweets look just like what you’d see at any other bakery, but here they are made differently. Besides being gluten-free, the cinnamon buns and other baked goods are dairy and lactose-free, egg-free, and cholesterol-free. And they’re 100% vegan.

Of course, at 730 calories per cinnamon bun, it’s not diet food. “I’m not saying it’s healthy,” says owner Liz Morales, “but it is a healthier option” because all of the ingredients are plant-based, she explains.

Cinnaholic was one of the first businesses to take advantage of the city’s fast-track permit process, which cuts several months off of the application process, and was designed to help with Evanston’s economic comeback from COVID.

Morales says “everybody was so helpful” at the city in getting the paperwork done quickly. “It was amazing,” she adds.

As for Tapville Social, that bar-restaurant is part of a fast-growing nationwide franchise operation based in Naperville. The company hopes to open 30 franchises soon, and then add 35 more around the country.

When you “pour your own” at Tapville, you will likely be pouring something from nearby. “We work almost exclusively with local breweries and distilleries,” says employee Joey Brittain, at the Naperville location.

Of course, the resurgence of COVID-19, even in Evanston where the positivity rate is low, comes at a time when restaurant owners were hoping pandemic-related troubles were behind them.

“As an owner I will always protect my employees,” Morales says. “I tell everyone to keep their masks on,” even if they’re not required, she adds. “And we disinfect every single time.”

Even in good times, the restaurant business is a challenge. Robertson was general manager of Bar Louie for a dozen years, before that location closed in 2019. The shutdown was due to financial woes of the parent company, not troubles with the local location.

Now, a restaurant that Robertson owns, at the same location, plans a “soft opening” on Tuesday for friends and family, and expects a full public opening next weekend.

For now, at least, Robertson sees the glass of beer you can order at Ridgeville Tavern as half full, not half empty.

“Downtown Evanston was hurting for awhile,” he says. “But now it’s coming back.”