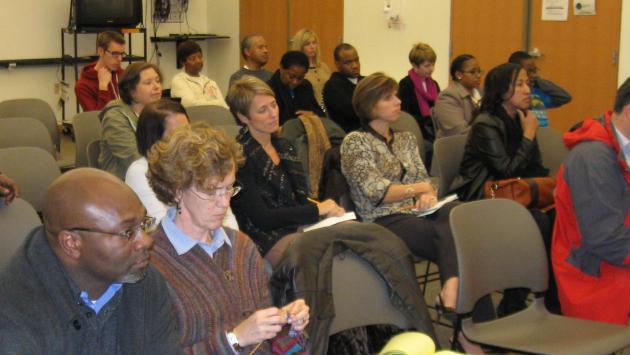 Supporters of a new school in the “central core” of Evanston’s 5th Ward turned out en masse Wednesday night to urge the Evanston/Skokie District 65 Board of Education to “act emotionally” and approve a new school as the best solution for addressing growing enrollments in the district.

Supporters of a new school in the “central core” of Evanston’s 5th Ward turned out en masse Wednesday night to urge the Evanston/Skokie District 65 Board of Education to “act emotionally” and approve a new school as the best solution for addressing growing enrollments in the district.

It was the second of three public forums the board is conducting in its effort to determine the will of the people for a decision that is likely to require voter approval in a referendum next March. At the first forum, held Monday night, only three persons turned out to make their views known. Last night, nearly two dozen persons testified and all but one pressed for a new school.

The lone holdout was community activist Junad Rizki, who regularly attends Evanston City Council meetings to chide that group for its spending practices.  He noted that the City of Evanston has already approved a budget that will raise taxes more than the inflation rate and that “taxpayers are going to be really unhappy” if asked to pay even more taxes to build a new school.

Board President Katie Bailey announced at the outset of the meeting that board members had tentatively narrowed the choices to three, following a lengthy discussion of the options at Monday night’s meeting of the Finance Committee.  A full kindergarten-to-eighth-grade school, which was recommended by the board’s ad hoc committee on the issue, has now been taken off the table, she said.

The three remaining choices are a K-5 school, a 6-7-8 middle school, either one of which would likely require a referendum, or a third choice that would be to add classrooms as needed, even though it might require shifting students from school to school from time to time to fill open spaces and to adjust other assumptions, such as optimal size of classes.

Board member Richard Rykhus, an advocate of the third choice, said the board would make every effort to stay within its guidelines on class size and would attempt to minimize other disruptions.

Clearly, those who testified Wednesday night preferred the K-5 option as one that could revitalize the 5th Ward and help stem the decline of an area that one resident characterized as prone to drug-dealing, guns, and gangs. “People are dying in the 5th Ward,” he asserted. There was little support given to the middle-school option.

Among those testifying in favor of a new school were two Evanston aldermen—Jane Grover, 7th Ward and Peter Braithwaite, 2nd Ward.  Braithwaite said he was speaking for the black community in asking for a new school, noting that Evanston is on the cutting edge of a lot of things, “but not when it comes to our kids.”

Grover said she could see the interaction that occurs between parents as they pick up their kids after school, but that those who were bused to school never had the benefit of that interaction. She assured the board that if they choose to go for a referendum to approve a new school, they could count on her to “be on your team” to make it successful.

But the real passion came from ordinary parents and former students of Evanston’s schools who repeatedly asked “if not now, when”? They also made the point that somehow the money was always found to add classrooms and to okay improvements to schools in predominantly white areas of the city, but that those approvals never make it when it comes to schools in predominantly black areas.

“The same way you built this building when you already had a building,” said one, referring to the district headquarters building at 1500 McDaniel St., “you can build us a new school.”

Community members will have one last time to make their case. A third open meeting on the issue will be held for one hour at 6 p.m. Monday, preceding a regular meeting of the board at 7 p.m.

Photo: Aldermen Braithwaite and Grover, foreground, await their turn to testify in favor of new school.