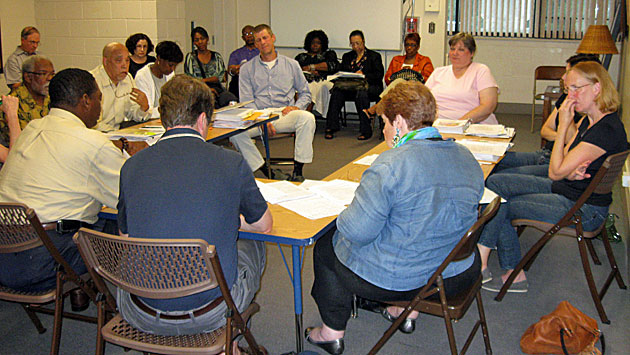 The New School-Referendum Committee of Evanston/Skokie School District 65 moved closer last night to developing a draft of the recommendations it is planning to send to the full school board in September, but first it wants to try it out in a town meeting format next week.

The New School-Referendum Committee of Evanston/Skokie School District 65 moved closer last night to developing a draft of the recommendations it is planning to send to the full school board in September, but first it wants to try it out in a town meeting format next week.

So far, the committee, comprised of three board members and 11 community representatives, has agreed to recommend a new school for the central core of Evanston’s 5th Ward, encompassing all grades from kindergarten through the eighth grade.  The only dissenting vote was from 3d Ward resident Drew Stover.

Last night the committee struggled with the issue of how a new school would impact the enrollment of the district’s other elementary and middle schools.

Currently, students in the 5th Ward are bused to schools in other parts of the district. During the “public comment” portion of its meetings, the committee has heard from a number of 5th Ward residents lobbying for a school to which their children could walk.

The committee has undertaken a telephone survey of 5th Ward parents to quantify the depth of these feelings. Results of this survey are expected by the committee’s next meeting on Wednesday, July 20, at district headquarters, when it plans to review a written draft of the committee’s recommendations.

The following evening, July 21, the committee is scheduled to appear at Ald. Dolores Holmes’ 5th Ward meeting, to be held at the Fleetwood-Jourdain community center, where it expects to hear from constituents from throughout the community.

To date, the committee has not surveyed the views of residents outside the 5th Ward, who would be impacted financially as well as potentially being redistricted out of their present school attendance areas.

The committee last night reviewed a number of redistricting issues that a new school would present. It agreed that students would have the option of staying at their present schools, if they wish, but new students would be expected to attend the new school, although siblings would be permitted to enroll at the same school.

“The Board would have to assess and address the impact on enrollment patterns and space utilization throughout the district,” said Superintendent Hardy Murphy. While accepting the assumption that enrollment management would be an administrative function, Murphy said that “this is one that will create some heat” and would require the support of the Board.

Committee Co-chair Jerome Summers speculated that establishment of a school in the 5th Ward would be a boon to the area and would attract additional families that would swell enrollment numbers.

As for the impact on district finances, the committee agreed that a consultant would be needed to present options and that, if it were determined that a referendum would be required, consulting fees could amount to upwards of $60,000.

The committee has been operating under the assumption that a new school would require a referendum to authorize the issuance of bonds to finance the venture, but committee member Lloyd Shepard warned that “if we have to go to a referendum, we’ll be dead in the water.”

The 5th Ward community meeting on July 21 is scheduled for 7 p.m. at the Fleetwood-Jourdain Center, 1655 Foster St.

Poll: Do you favor building a 5th Ward school?