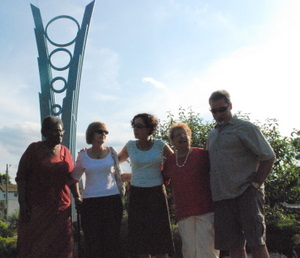 City officials gathered for the dedication of a new Evanston sculpture Thursday evening.

City officials gathered for the dedication of a new Evanston sculpture Thursday evening.

Coghlan took inspiration from the work of Dr. Elizabeth Hill, who founded the Community Hospital in 1914 because blacks were denied treatment at other hospitals.

In one sense, the sculpture is meant to symbolize Dr. Elizabeth Hill’s arms receiving the head of a child during a childbirth, Coghlan said.

In a similar sense, it also symbolizes arms inviting people into the neighborhood, he said. The sculpture stands the West side of Green Bay Road, facing southbound drivers entering the 5th Ward.

“It’s meant to be a fence post and a gateway to welcome people in here,” Coghlan said.

It it represents the evolution of an individual’s role in the community as he or she grows older, he said.

“As you get older and the circle gets larger, you start to realize your part is bigger,” Coghlan said.

Using funds from the Neighborhood Business District Improvement Plan, the city paid $25,000 for the whole project, which included landscaping the once scrubby triangle where the sculpture stands.

He had been trying to get a piece of art near the area for years. At one point, while trying to persuade city to place a different sculpture there, he and other community members built a mock-up sculpture with cardboard and plywood on the triangle to to show that it would fit.

“She would be proud to see what this neighbohood has become,” Brasher said.

(Above: Alderman Delores Holmes, Mayor Elizabeth Tisdahl and former mayor Lorraine Morton link arms with Muffy McAuley and John Leineweber of the Dr. Hill Neighborhood Association at the dedication of the sculpture.) 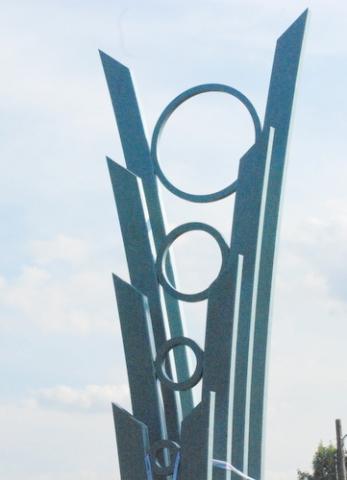