The Plan Commission Wednesday will hear a proposal to develop a shopping center on now-vacant land at 2424 Oakton Ave. across the street from Home Depot

The Plan Commission Wednesday will hear a proposal to develop a shopping center on now-vacant land at 2424 Oakton Ave. across the street from Home Depot

Behind that would be a three-story self-storage facility and a parcel to be developed later. At the rear of the lot the project calls for three small office buildings that likely would be used as medical offices.

At a Site Plan and Appearance Review Committee meeting last week Mr. Fry said that the inclusion of the self-storage facility is important to shield the site from what he called “our nemesis, the concrete plant next door.” 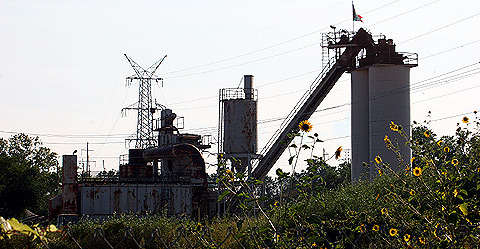 The concrete plant just west of the shopping center site is across the city line in Skokie.

“I’ve tried for a year and a half to do a deal for the property next to the concrete plant,” he said, “but everybody says they’re not interested in being next to it. It’s ugly and throws off dust and causes horrible problems in marketing the property.”

“This self-storage facility effectively screens a large portion of the concrete plant,” Mr. Fry said, and that thrills the doctors he’s lined up to purchase the medical office buildings on the site.

Assistant Community Development Director Dennis Marino said “a self-storage facility has a deadening impact on surrounding uses.” He said the building’s preliminary design, which tries to make it look more like an office building, helps somewhat, but “still has a ways to go.”

Fry’s daughter, Amy Fry, product manager for the project, said the project will offer public benefits in the form of two or three sculptures to be placed along the Oakton frontage. The plans call for a winding sidewalk around the sculptures and seating areas as well.

Mr. Fry said that Oberweis Dairy is one of the tenants being considered for the retail shops in the planned development project. He said he’s in serious talks with nearly a dozen other potential tenants, but didn’t want to name any of the others until after the Plan Commission has reviewed the project.

The now-vacant site formerly housed an industrial warehouse. The land will have to be rezoned to build the shopping center.

Also on the Plan Commission agenda Wednesday is a continuation of a hearing on the plan to replace the shuttered Evanston Theater property on Central Street with a five-story building containing 55 condos and first-floor retail space.