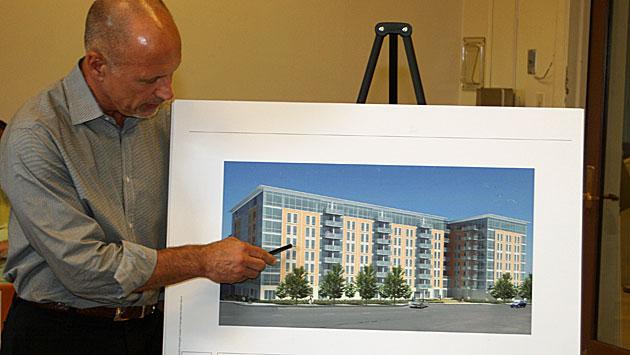 An Evanston city staff committee has recommended approval of plans to replace the hole in the ground left by the unfinished Sienna condominium complex with a new rental apartment building.

The project, announced earlier this month by Northfield-based Focus Development, would substitute a single 174-unit rental building for the final two condominum structures initially planned at the Sienna site in the 1700 block of Ridge Avenue.

Walter Hallen, who chairs the city's Site Plan and Appearance Review Committee, said the new design matches the materials used in the the two Sienna buildings that were completed several years ago and that front on Oak Avenue.

Hallen said the rental units will be smaller than similar units in a condo development, because "people will rent a smaller unit than what they would buy." That means the total floor area covered by the project will be the same, despite the increase in the number of units.

Architect George Halik said the main entrances to the underground parking for the new building will be off Clark Street, but because of the slope of the site a few parking stalls will be entered from the alley at the south end of the property. 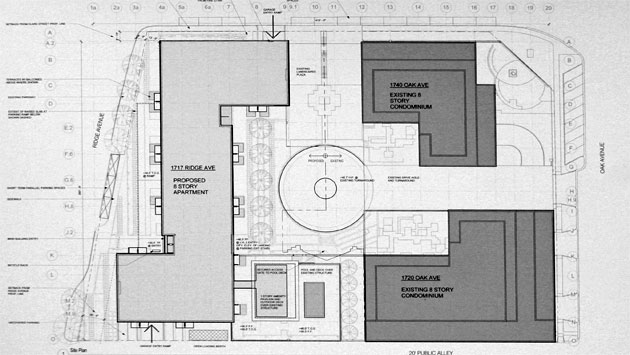 Top: Architect George Halik shows the committee a rendering of the new building looking southeast from the corner of Ridge and Clark. Above: A drawing of how the new building, on the left, will relate to the two existing Sienna condo buildings.

Halik said pedestrians will enter the new 1717 Ridge Ave. building from Ridge and there will be a dropoff zone there for cars as well.

The eight-story building will have a plaza area on the second floor and building amenities, including a swimming pool, cyber cafe and fitness center, will be on the third level.

Residents of the condominum development will also have access to the pool.

The plans now go to the City Council's Planning and Development Committee, and the modifications requested to the original Sienna planned development ordinance will eventually require a vote by the full City Council.