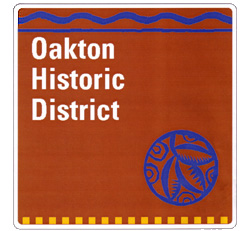 Evanston may soon have new signs to identify its historic districts.

The Preservation Commission this week recommended that the City Council spend about $25,000 to replace the faded, 20-year-old signs for the city’s first historic districts and install signs in two newer districts that have never been signed.

Evanston may soon have new signs to identify its historic districts.

The Preservation Commission this week recommended that the City Council spend about $25,000 to replace the faded, 20-year-old signs for the city’s first historic districts and install signs in two newer districts that have never been signed.

The design for the new signs was developed by local graphic artist Jack Weiss and follows designs he developed for way-finding signs installed downtown and elsewhere in Evanston.

Some preservation commission members objected to the 2.5 inch lettering chosen for the signs.

â€œWhy can’t the lettering be larger,â€ Commissioner Stanley Gerson said, â€œwhy waste half the space with the brown background?â€

Commissioner Thomas Prairie, an architect, also said he thought the lettering was too small.

The Federal Highway Administration’s Manual on Uniform Traffic Control Devices says that on urban streets the main lettering on guide signs should be at least 4 inches high.

Commissioners Gerson and Prairie also objected to the graphical logo in the design.

â€œYou had to tell me it’s acorns and leaves,â€ Mr. Prairie said, â€œIt’s very abstract. It should have some relationship to the historical nature of the neighborhood, not be something just to fill up space on the signs.â€

Mr. Gerson objected to the use of the dark blue logo against the brown background. â€œIf you’re 50 feet away, for someone my age this is almost illegible,â€ he said, â€œthe acorn should be something that stands out.

Mr. Weiss said the lettering is the most important element on the sign and needs to stand out, so by design the color for the logo and other graphic elements are more subdued. He added that the signs would be reflective so the elements would be highlighted more at night.â€

He said the acorn and oak leaf cluster design was derived from elements used in the design of the city’s classic Tallmadge street lights. 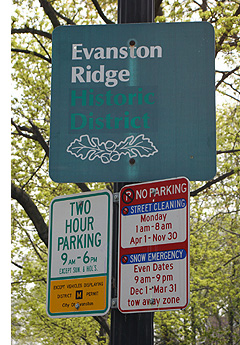 Mr. Weiss also argued that to make room for longer words, like â€œLakeshoreâ€ in historic district names, he had to limit the type size.

Commissioner Jordan Cramer said the commission had failed to take any action on new signs in the year since it rejected Mr. Weiss’s first design proposal. â€œI’d rather have some signs than no signs, and I happen to like this design,â€ he said.

City Planner Carlos Ruiz said there’s no guarantee that the $25,000 budgeted for the sign project will still be available if the project is further delayed.

The commission voted 4-2 to recommend the sign project to the City Council.

If approved by the council, the signs would be placed in the Lakeshore, Ridge, Northeast Evanston and Oakton historic districts.