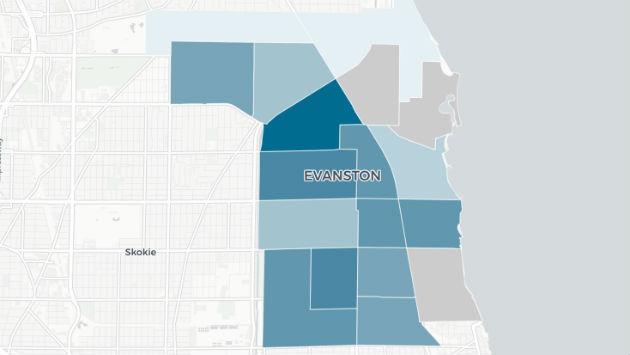 A new study from New York University finds substantial variations in life expectancies among census tracts in American cities — including here in Evanston.

For Evanston the citywide average life expectancy was 82 years. That’s 3.2 years longer than the nationwide average.

For individual tracts the life expectancy ranged from 75.5 in tract 8092 in west Evanston to 88.8 in tract 8088 in northeast Evanston.

By comparison, Chicagoans had an average life expectancy of 77.3 years with a range from 59 to 90 years across census tracts — the largest spread in the nation in the study.

Arlington Heights residents had an average life expectancy of 81.3 years with a range of 77 to 86 years.

The researchers at the Department of Population Health at the NYU School of Medicine said the largest life expectancy gaps occur most frequently in cities that have higher levels of racial/ethnic segregation.

Evanston had far fewer children in poverty, 8.5 percent, than the 22.6 percent average, a positive indicator, but 39.6 percent of Evanston households faced excessive housing costs, compared to 37 percent across the 500 cities, a negative indicator.

We scored high on park access and walkability, but also high on particulate matter air pollution and lead exposure risk.

“Each city has its own history and challenges that influence how long its residents live. The data on life expectancy gaps are an invitation for city leaders to dig deeper into the conditions that influence health, to better target action to close these gaps and ultimately improve health for everyone, Dr. Marc N. Gourevitch, the principal architect of the City Health Dashboard, said in a statement. “Your neighborhood shouldn’t influence your odds of seeing your grandchildren grow up.”

See an interactive version of the map and more data on Evanston’s health metrics.