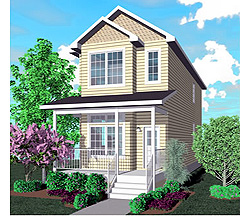 Just shy of a deadline to spend federal affordable housing funds, the Evanston City Council this week approved using $95,000 of the federal money to help build a single-family home at 1820 Dodge Ave.

The project will see a factory-built, traditionally-styled, two-story home constructed on the narrow, now-vacant lot.

The home will be constructed at the Old World Homes factory in Pickneyville, Ill., with the work inspected by a third-party inspector approved by Evanston's building department and the inspections paid for by the project developer, Housing Opportunity Development Corporation.

The city, which has been looking for new taxes to impose to expand its pool of affordable housing money, has also been having difficulty spending the money it already has available.

The city receives about $500,000 from the federal HOME program annually and now has about $1.8 million in funds available to commit to new projects.

In addition it has $90,000 in demolition tax funds, $40,000 in developer contributions for affordable housing and $192,536 in the mayor's special housing fund. Developers have also pledged over $1 million in contributions that are due to be paid as their projects are completed.

HODC officials said they had originally considered traditional stick-built construction techniques for the Dodge Avenue site but couldn't keep costs in line with the available funding. It's estimated the pre-fab approach will cut $25,000 to $30,000 from the project cost.

The new house will have about 1,600 square feet of living space, plus a full basement. It will have 3 bedrooms, 2.5 baths and a detached two-car garage.

In addition to the federal funds, the project also benefits from donation of the lot, which is valued at $50,000.

A restrictive covenant will limit the resale price to remain affordable for 20 years.

HODC officials say they'll conduct a lottery targeted to Evanston residents to select the purchaser, and said over 100 people have already completed the housing counseling program required to qualify for the lottery.

Community Development Director James Wolinski said the property formerly had a house on it that was torn down years ago after the city condemned it because of housing code violations. Previous developers had proposed two-unit housing on the site, which the city said was only large enough for a single-family home.

He said the lot has been a maintenance hassle over the years with unauthorized dumping and other troubles, "so this is a great project."