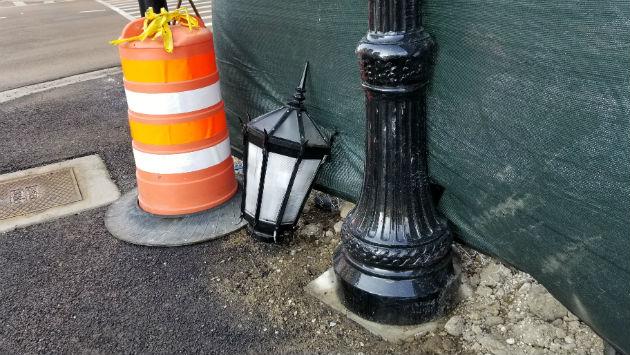 The Canton Repository newspaper says the company laid off 200 workers in December and plans to dismiss its remaining workers early this year. The paper also says the company’s owner is facing lawsuits and has failed to pay vendors.

A company history says a 1931 order from Evanston for 4,800 poles helped keep the firm in business during the depression and Evanston placed another huge order for replacements 50 years later, in 1981.

City Manager Wally Bobkiewicz told Evanston Now this morning, “It is clear from the initial work being done on streetlight master plan that Tallmadge lights are here to stay. Staff has already started thinking about options to assure a better supply chain to get poles and the light fixtures far into the future.”

The city last year tested 14 fiberglass replicas of the Tallmadge lamps on a three-block stretch of Seward Street between Dodge and Wesley avenues.

A city consultant last fall produced a report saying street lighting is inadequate across the city, in large part because of the Tallmadge lights, but a devoted group of fans of the fixtures, which were designed by local architect Thomas Tallmadge, told the consultant at a public meeting that they don’t want to see the old-style lights replaced.