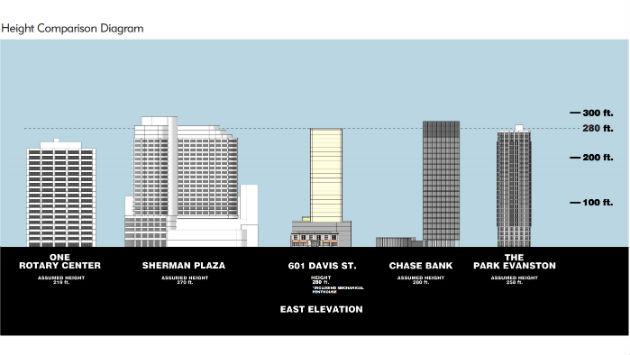 Plans for a new high-rise building in the 600 block of Davis street call for creating one of the tallest structures in Evanston.

The developer’s proposal to the city indicates that at a total of 280 feet, including the mechanical penthouse, the new mixed-use retail and rental apartment building would be slightly shorter than the Chase Bank tower at 1603 Orrington and the Sherman Plaza condo development.

Other sources list the Chase Bank tower as 280 feet tall and the Sherman Plaza building as 276 feet tall, but those measurements typically exclude the mechanical penthouse.

Excluding its mechanical penthouse, the proposed new building is listed as being 263 feet tall. 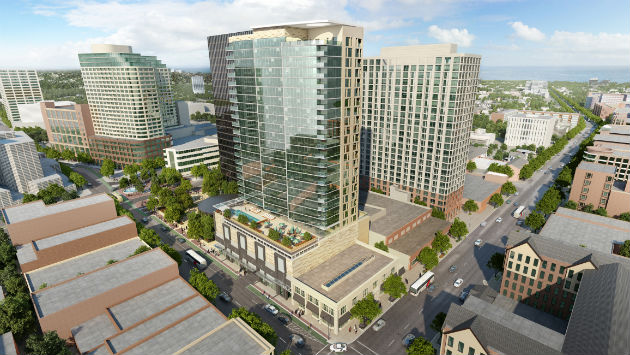 A rendering of an aerial view of the 600 Davis block with the new building.

The new project, first reported by Evanston Now on Tuesday, is planned to have 217 apartment units and 176 parking spaces.

It site includes the landmark University Building on the northwest corner of Davis Street and Chicago Avenue, which would be preserved and renovated, plus a vacant lot just to the west and the Chase Bank drive-thru that fills the rest of the space to the mid-block alley. 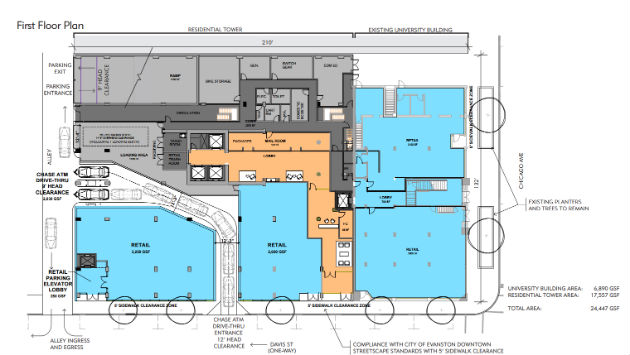 The ground floor of the the new structure would include two retail storefronts as well as a reconfrigured drive-thru for the bank that would see cars enter from Davis, but exit into the alley.

As a planned development that is seeking several variations from existing zoning, the project will have to go through a review process by the city’s Plan Commission and City Council. Those meetings have not yet been scheduled.