Developers of a mixed-use housing project planned for Evanston’s near west side say they hope it will set a national standard for sustainable building design.

A rendering of a pair of six-flat buildings, connected by a bridge of bonus-room space on the second and third floors, but with open space at ground level.

The 137-unit development proposed by Cyrus Homes would feature a geothermal heating system drawing warmth from the earth, photovoltaic and thermal solar panels capturing energy from the sun and even parking for a small fleet of I-Go car-sharing vehicles.

The project site runs from Emerson to Foster streets along the former Mayfair railroad right of way. It includes the long-vacant Bishop Freeman factory and a large parking lot now used to store cars for an auto dealership.

He said he hoped some percentage of those units would be affordable to persons making as little as 60 percent of the median income for Chicago-area households, but that most would be targeted to households earning 80 percent to 120 percent of that level.

“Our requiremment is that the affordability be seemless in the development,” Fleckman said, “so that nobody can say ‘that’s the building that’s affordable.'” He said affordable units would be included in all the building types in the project. 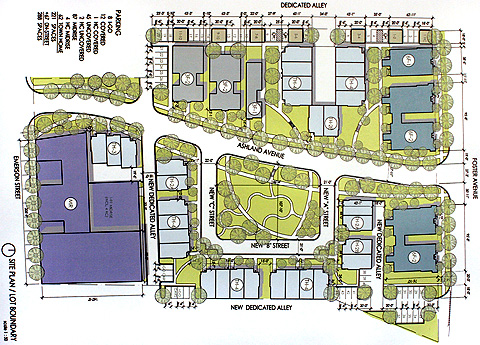 A site plan, showing a new Ashland Avenue running north to south through the site and a public park at the center of the development.

The site plan includes 30 units in five six-flat buildings fronting on Foster Street, 15 units in three and six-flat buildings facing a new extension of Ashland Avenue through the project site, 31 townhouse units, most of which would face Ashland or a new public park, and 61 units in a mid-rise building facing Emerson.

The mid-rise would have four- and six-story high sections and would include ground-floor retail space. All the other structures would be three stories tall.

Carmen Vidal Hallet, a planner for the development, said all the buildings would be slab-on-grade construction, without basements, so that all the first floor units and all units in the mid-rise elevator building would be handicapped accessible.

The developers say they plan to hire Community Builders, which offers workforce development training to disadvantaged young adults, to handle a significant portion of the work on the site.

Daniel Cheifetz of Indie Energy, which has installed the geothermal heating system for the Cyrus Homes Church Street Village development now under construction, said the goal at the new site would be to produce energy savings of 50 to 70 percent.

He said the project will likely be able to achieve a platinum rating — the highest performance standard under the U.S. Green Building Council’s LEED system.

The project also is being designed to minimize storm water runoff using a combination of techniques ranging from a permeable concrete paving system to bioswales in open space areas.

All the units are planned for sale, Fleckman said, with the townhouses to be under fee-simple ownership and the multi-unit buildings as condominiums.

“We had thought about rental,” he added, “but frankly, the community’s last response to rental, at the Church-Darrow site, showed so much resistance to it, that we thought the community would not be interested in it here.”

Hallet said plans call for the buildings to be constructed with a combination of brick and wood cladding and will include “living walls,” a metal grid system integrated with the walls that will let vines and other plants grow up the buildings.

He said the developers “have been extremely flexible in their thinking” and have met city goals outlined in the recently adopted west side master plan.

“Part of the issues was reconnecting the street grid,” Wolinski said, “We wanted Ashland to be a through street. The developers have seen that and agreed to it.”

“The other big part is open space. This development would replace the existing Gilbert Park. Through several plans and variations, I think we now have something that hopefully the Parks Department feels is a more than adequate replacement that will be used a lot more than Gilbert Park is used,” he said.

“The whole aspect of sustainability is sort of the icing on the cake,” Wolinski added, “It will be the first of its kind in the area and maybe in the country.”

After the meeting, Carlis Sutton, of 1821 Darrow Ave., a community activist and frequent critic of west side development proposals, said of the new project, “So far, so good.”

In an interview, Kihm said the developers will seek financial assistance from the city’s West Side Tax Increment Financing District to clean up pollution on the site created by chemicals once used to clean machinery at the old Bishop Freeman plant.

He said the developers hope the project can go before Plan Commission for review by next month and that if city approvals are obtained, he hopes demolition work can start early next year.