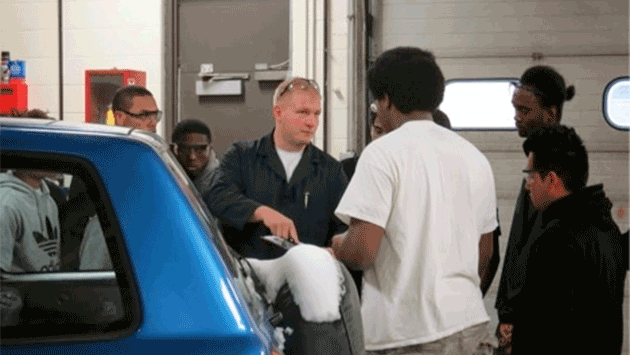 DeOndre Smith was unemployed when he heard about a new auto mechanic training program in Evanston.

Smith, 20, was immediately interested in the program at Evanston Township High School. Even though he lives in Harvey in Chicago’s far south suburbs, Smith began making the 2 ½-hour trip everyday to ETHS in February.

Last month, Smith was among 12 young men who graduated from the unique program created through a collaboration between ETHS, the Youth Job Center and Oakton Community College. Evanston businesses, including Autobarn, Duxler and Midas, offered paid internships to participants.

“These 12 young men were not previously connected to work or school and faced a definite risk of chronic unemployment or underemployment,” said James Kauffman, interim director at the Youth Job Center.

The program started with a 10-day job readiness training course at the Youth Job Center, followed by a 200-hour paid internship at Autobarn, Duxler, or Midas. They took automotive classes at the ETHS state-of-the-art automotive lab.

Classes were taught by Oakton Community College instructor Tom Sprengelmeyer, who customized the curriculum so that basic skills could be learned in 10 weeks. He started with the skills necessary to be successful in any work place, including timeliness, attire and interaction with customers, then moved on with basic repair work.

“The students were an incredible group of young people,” Sprengelmeyer said. “They were very dedicated and wanted to be there and be the best that they could be. They made it work.”

Nichole Morrison, YJC career adviser, also said she was impressed by the commitment shown among participants. “Some of these young men traveled from the far south suburbs such as Midlothian,” she said. “It was a challenge to get here, especially in the brutal winter we just had, but they made it.”

Morrison explained that the participants attended six hours of classes every week and worked in their paid internships two days a week.

They received their certificate of completion and can now move forward in the auto industry, she said. “They were able to get their foot in the door and can now take more training,” she said.

A graduation ceremony was held May 29, in which each graduate received a tool kit – a requirement for work in the car repair industry.

A second course in automotive repair will be offered through the collaboration and taught at ETHS this fall, Morrison said. The program will include 20 students.

Smith said he was thrilled to finish the program and get his first job in auto repair. He is working full time at Autobarn in Evanston at 1033 Chicago Ave.

“I loved the program. It was awesome,” he said. “I really liked our teacher, Tom [Sprengelmeyer] because he understood we were all grown people. He didn’t speak to us like we were kids, and he gave us a lot of his time. It was such a good program.”