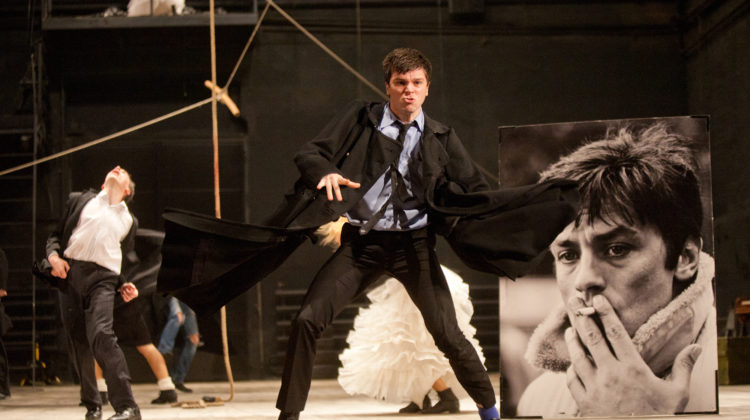 Thirteen critically acclaimed plays from the U.K. and Russia will be captured on film and featured in the 2017/2018 Stage on Screen series at Northwestern University’s Virginia Wadsworth Wirtz Center for the Performing Arts.

Stage Russia highlights include two plays by Anton Chekhov: “The Seagull” in a boldly reimagined production by the Satirikon Theatre and “Uncle Vanya,” an award-winning production by Vakhtangov Theatre. Cutting-edge offerings include the breathtaking modern opera “Drillalians” by the Stanislavsky ElectroTheatre, Nikolai Erdman’s black comedy “The Suicide” and the Lensoviet Theatre’s David Lynch-like “Macbeth.Kino.”

Diane Claussen, managing director of Northwestern’s Wirtz Center, said, “We are excited to be able to expand the Stage on Screen series, which has been popular with our audiences. The new broadcasts offered by Stage Russia HD are specifically attracting new Russian-speaking arts patrons to Evanston from the greater Chicago metropolitan area.”

Yury Butusov’s frenetic production for Satirikon Theatre abounds with an incredible freedom and openness, delving deep into the throes of artistic creation and the anguish of the artist who struggles to find a language of his own. This is not only a performance about the theater, it is an analogy of the theater that devours its children like monsters.

Presented in Russian with English subtitles, the running time is three hours and 50 minutes (with one 15-minute intermission).

Set during the mid-1980s, in the midst of the AIDS crisis and a conservative Reagan administration, New Yorkers must grapple with life and death, love and sex, heaven and hell.

This new staging is directed by Olivier and Tony award-winning director Marianne Elliott (“The Curious Incident of the Dog in the Night-Time” and “War Horse”).

In the early hours of the morning on the campus of an American college, Martha, much to her husband George’s displeasure, has invited the new professor and his wife to their home for some after-party drinks. As the alcohol flows and dawn approaches, the young couple is drawn into George and Martha’s toxic games until the evening reaches its climax in a moment of devastating truth-telling.

In an occupied desert nation, a radical from the wilderness is on a hunger strike, and a girl’s mysterious dance will change the course of the world. This charged retelling turns the infamous biblical tale on its head, placing the girl we call Salomé at the center of a revolution. Internationally-acclaimed theater director Yaël Farber (“Les Blancs”) draws on multiple accounts to create her urgent, hypnotic production.

Please note this production contains nudity, and the characters depict and make reference to sexual violence.

A young woman is driven to the unthinkable by her desperate desire to have a child in Simon Stone’s radical production of Lorca’s powerful masterpiece. This critically acclaimed production starring Billie Piper sold out at the Young Vic. Set in contemporary London, Piper’s portrayal of a woman in her 30s desperate to conceive builds with elemental force to a staggering, shocking climax.

The running time is one hour and 30 minutes.

Sergey Zhenovach’s adaptation of Nikolai Erdman’s comedy centers around a young, unemployed man desperate enough to contemplate ending it all. As soon as he declares his will to die, he finds himself surrounded by a variety of characters begging him to kill himself as a gesture for their cause. Flattered by this notoriety but panicked at the prospect of actually having to go through with it, he must find a way out that somehow leaves his dignity intact.

Presented in Russian with English subtitles, the running time is three hours (with one 15-minute intermission).

It’s 1971 in New York, and there’s a party on the stage of the Weismann Theatre. Tomorrow, the iconic building will be demolished. Thirty years after their final performance, the Follies girls gather to have a few drinks, sing a few songs and lie about themselves. Tracie Bennett, Janie Dee and Imelda Staunton play the magnificent Follies in this dazzling new production. Directed by Dominic Cooke (“The Comedy of Errors”), “Follies” features a cast of 37 and an orchestra of 21.

The running time is three hours and 30 minutes.

This unique adaptation is about what Chekhov’s characters think and what they admit to only at moments of emotional turmoil. They are at times tongue-tied or overly brutal, but their revelations break out of them fervently, desperately, just as a man breaks out of a stuffy room into the open air. A Golden Mask Winner for Best Drama, “Uncle Vanya” features the inimitable Sergey Makovetsky as Voynitsky.

Presented in Russian with English subtitles, the running time is three hours (with one 15-minute intermission).

Directed by Nicholas Hytner and written by Richard Bean and Clive Coleman, the production reunites the creative team behind Broadway and West End hit comedy “One Man, Two Guvnors.”

Yuri Butusov’s pastiche of conflicting styles only touches on the storyline of Shakespeare’s “Macbeth,” reflecting, instead, both confusion from confronting the myth and the desire to unveil it. It follows a non-linear technique, compiling fragments, jumbling up the characters, having them swap roles, understanding that only by blending together these singular moments can the desired completeness be achieved.

Presented in Russian with English subtitles, the running time is three hours and 40 minutes (with one 15-minute intermission).

Alongside earthly reality, another civilization exists parallel to it. Drillalia, the land of the Drill, is inhabited by numerous races, and its people throughout history have traveled to and from Earth, leaving signs of genius behind, while opening up their own world to destruction. We follow the initiation and adventures of a Drillalian prince, on a journey through time and space, in an effort to save his people. Boris Yukananov’s visionary modern opera for Stanislavsky ElectroTheatre in Moscow perfectly weds drama and music.

Presented in Russian with English subtitles, the running time is two hours and 30 minutes (with two 10 minute intermissions).