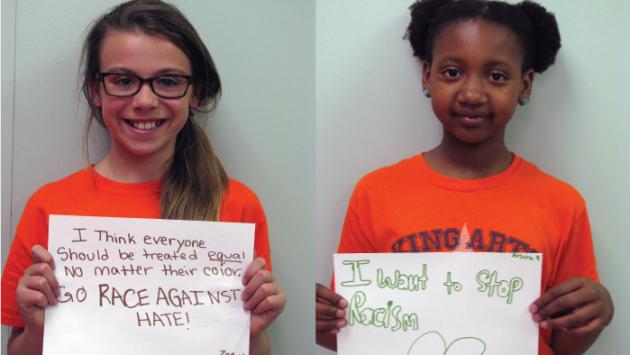 Over 4,500 participants are expected to participate in the 14th annual Ricky Byrdsong Memorial Race Against Hate, which will take place Sunday, June 16, at Long Field in Evanston and includes a 5K run/walk, 10K and youth mile.

The Race honors the late Northwestern University basketball coach, who was killed in his Skokie neighborhood by a white supremacist while walking with his young children in June 1999. Created by his widow Sherialyn, the community event honors Byrdsong’s legacy of working with young people and brings attention to the need to combat hatred in all forms. In 2007 Sherialyn entrusted the future stewardship of the Race to the YWCA Evanston/North Shore.

The 5K walk/run and 10K courses are fast, flat and scenic races down Sheridan Road and along the shores of Lake Michigan — with the 10K looping through the campus of Northwestern University. The 10K race begins at 7:30 a.m., the 5K walk/run will start shortly thereafter and the youth mile, an out and back course on Sheridan Road, kicks off at 9 a.m. for youth nine through 13 years old and at 9:15 for children two through eight.

“This race has grown every year, and registration this year has been stronger than ever,” said Karen Singer, Executive Director at the YWCA Evanston/North Shore. “We are anticipating a huge turnout and are honored that so many people come back to support the Race and all that it stands for every year. It says a lot about the strength of our community.”

Pre-registration is ongoing, with a fee of $35 for the 5K/10K and $10 for the youth mile, which includes a free technical t-shirt for the first 4,500 5K/10K registrants and 500 youth milers to pick up their packets.

Participants can also register on Race Day beginning at 6:15 a.m. for a $39 fee; registration for youth is $15 at the race.

Pre- and post-race stretching will be led by AthletiCo and Lululemon, and the program includes on-field refreshments provided by Whole Foods, Starbucks, and Argo Tea. In addition, the post-race ceremony will include words from the Byrdsong family; an awards presentation; onsite stretching by AthletiCo, Accelerated Rehabilitation, and Wellness Revolution, and performances by Thousand Waves and Line Dance Divas.

For more information, visit the YWCA’s race website at www.ywca.org/raceagainsthate or call 847-864-8445.

Top: Girls from Girls on the Run at King Arts School in Evanston helped stuff some of the 4,500 goody bags for the Race Against Hate, and then posed with their answer to the question “Why do you race against hate?”