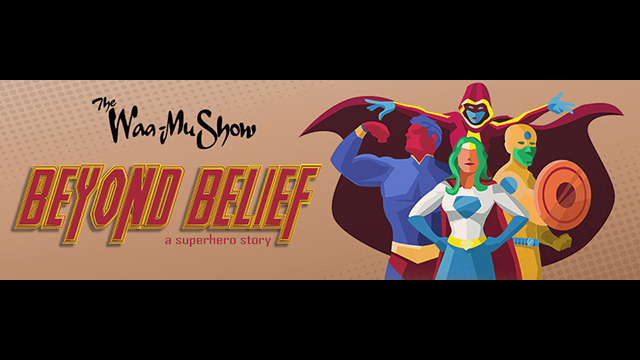 “Beyond Belief: a superhero story” will invite audiences to look for the extraordinary within themselves, when the 86th annual Waa-Mu Show opens April 28 at Northwestern University.

Co-produced by the Virginia Wadsworth Wirtz Center for the Performing Arts, Waa-Mu’s new musical “Beyond Belief” will run April 28 to May 7 at Cahn Auditorium, 600 Emerson St., on the Evanston campus.

Imagine U, the popular family theatre series at the Wirtz Center, and Waa-Mu will team up on Saturday May 6 to present Waa-Mu Community Day, featuring hands-on workshops and an accessible performance of “Beyond Belief” for all ages and abilities.

“Beyond Belief” is written, composed, choreographed and co-produced by more than 100 Northwestern students. Senior undergraduate student co-chairs Jessie Jennison, Charlotte Morris, Eric Peters and Justin Tepper lead the 2017 production under the artistic direction of David Bell. Bell is the Donald G. Robertson Director of Music Theatre in the Northwestern School of Communication and an award-winning director with international credits.

“Beyond Belief” follows two sisters who cope with harsh realities by creating a fantastical world of superheroes. Based on ordinary people from their lives, these extraordinary characters spring to life and demonstrate the resilient power of love and the qualities that make them “super.” The sisters soon learn that believing in one another may be the greatest power in overcoming life’s many challenges.

Prompted by the subject matter of “Beyond Belief,” Waa-Mu has spent the past year cultivating a relationship with Ann & Robert H. Lurie Children’s Hospital of Chicago. Members of the Waa-Mu team will visit Lurie Children’s to perform songs from the show and lead workshops with patients. Additionally, Waa-Mu will do fundraising for Lurie Children’s throughout the run.

“The traditions of Waa-Mu are what make the organization so special,” said the 2016-2017 co-chairs in a written statement. “It is important to us that we keep this sentiment alive by exploring how decades of tradition can best resonate with our community today. As we seek to illuminate what is extraordinary about every voice in our community, it is fitting to present a show that revolves around this belief.”

The Wee-Mu workshop for students ages five to 10 is led by Northwestern faculty member Ryan T. Nelson and members of the Waa-Mu Show. Participants will be led through the process of putting together a new musical and enjoy hands-on demonstrations of musical instruments, choreography and singing. Superhero costumes are welcomed and encouraged.

The Club Waa-Mu workshop is geared toward middle school students ages 11 to 13. Students will learn a song and dance from the show and have the opportunity to perform for their parents and chaperones, members of Waa-Mu and workshop leaders.

Workshop tickets are $5 each for youth and adults.

This performance will offer American Sign Language (ASL) interpretation and has been adapted to provide a relaxed and safe environment for students with autism, learning differences or other sensory needs, allowing every audience member to engage with the show in a way that works for them.

Preshow touch tours are also available. Please contact the Waa-Mu co-chairs at least one day in advance of the performance at [email protected] Purchase ASL and relaxed performance tickets online or by calling the box office at 847-491-7282.

Tickets to “Beyond Belief: a superhero story” are on sale now, and prices range from $10 — $30. Tickets can be purchased on the Wirtz Center website, by phone at 847-491-7282 or at the Wirtz Center box office, located in the Ethel M. Barber Theater, 30 Arts Circle Drive, Evanston.

The Waa-Mu Show began as a joint effort of the University’s Women’s Athletic Association (W.A.A.) and Men’s Union (M.U.) during the 1928-29 academic year. In recent years, Waa-Mu has evolved from a series of musical and theatrical vignettes into an entirely student-written and orchestrated musical. Dubbed “The Greatest College Show in America,” by Associated Press, the Waa-Mu Show is a forerunner in the world of musical theater writing, giving undergraduate students a chance to serve as leaders in every aspect of the production’s creation, from writing to orchestration to performance.