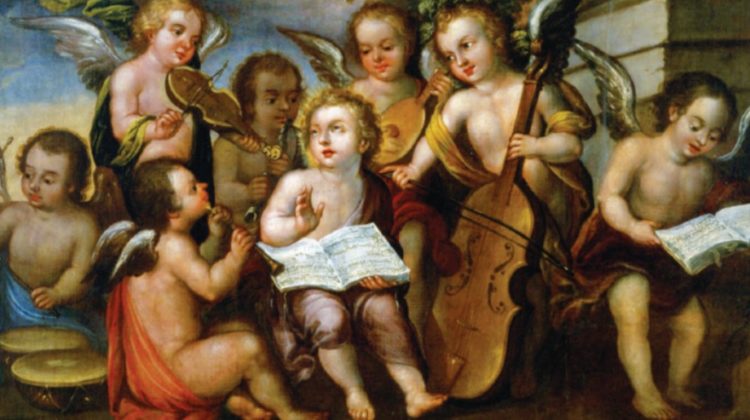 Imagine yourself in 17th-century Mexico City. It’s Christmas and the glorious singing of cloistered nuns soars over the walls of their convent and fills the square. On the other side of the plaza, a street band plays villancicos — joyful folk music of praise and celebration.

In the Newberry Consort’s upcoming program, “A Mexican Christmas: Angels in the Convent, Dancing in the Streets,” nearly 30 musicians will recreate this vivid scene!

This sumptuous program will feature a choir of women’s voices, directed by Ellen Hargis, singing the music of the convent, as well as musicians from EnsAmble Ad-Hoc, a group that specializes in Latin American and Spanish early music led by specialists Francy Acosta and Jose Luis Posada. These musicians will create the rich, jubilant folk music that would have been heard in the plazas at Christmas.

The music is from both Old and New Spain and includes a mass setting by Mateo Romero from The Newberry Choirbooks (a source housed at Chicago’s Newberry Library), villancicos by Juan de Padilla  from the Puebla Cathedral Archives, and treasures from many other manuscripts, researched and edited by the Newberry Consort’s artistic directors. Exuberant singing and rarely heard instruments including the bajón (Spanish baroque bassoon), leona (large guitar from Veracruz) and the quijada de burro (a percussion instrument made from a donkey’s jawbone), will bring the soundscape of a Mexican Christmas to Chicago.

The concert will take place Dec. 16 at 3 p.m. at First United Church in Evanston. Tickets are $40 for general admission and $50 for preferred seating. A pre-concert chat will take place 30 minute prior to the performance. To purchase tickets please visit: https://newberryconsort.org/a-mexican-christmas/