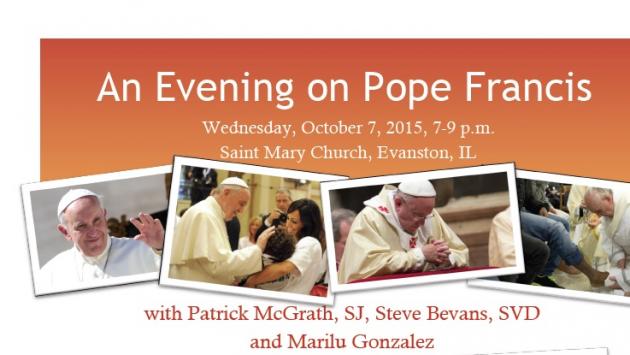 St. Mary Catholic Church in Evanston hosts "An Evening on Pope Francis" from 7 to 9 pm. on Wednesday, Oct. 7.

Patrick E. McGrath, SJ, is a Jesuit of the Chicago-Detroit Province and the president of Loyola Academy. He is also a popular retreat leader and noted homilist who focuses on the practical living of Catholic faith.

Stephen Bevans, SVD, is a priest in the Society of the Divine Word, an international missionary congregation. He served for nine years as a missionary in the Philippines and has been member of the faculty of Catholic Theological Union for 30 years.

Marilu Gonzalez is the director of Southwest City at Catholic Charities.  She is a consultant for social concerns, a leader in immigration education and a presenter on family issues, social justice, and formation for parents and young adults. Marilu has been married for 41 years and is a mother and grandmother. She has a M.A. in Pastoral Studies from Catholic Theological Union.

This event is free and all are invited.