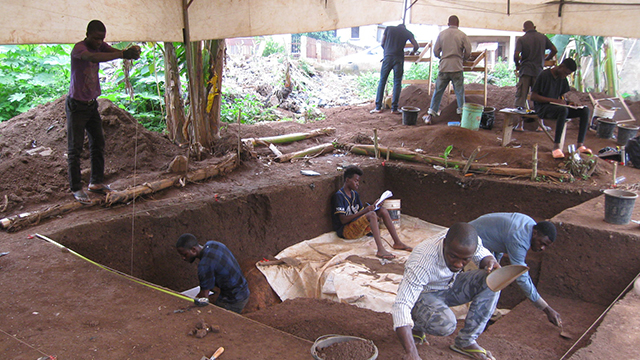 The Block Museum of Art at Northwestern University will host a week-long gathering of six archaeologists from Mali, Morocco, the U.K. and the U.S., working at the cutting-edge of research on medieval Africa.

The unprecedented gathering April 22 to 26 will bring this group of international scholars together for the first time to share their new findings about Africa’s understudied medieval period with public audiences. The research points to Africa’s participation in extensive trade and global interconnections in the eighth to 16th centuries.

The assembly of archeologists coincides with The Block’s exhibition “Caravans of Gold, Fragments in Time: Art, Culture and Exchange across Medieval Saharan Africa,” the first major exhibition addressing the scope of Saharan trade and the shared history of West Africa, the Middle East, North Africa and Europe in the medieval period. The participants have been advisors to the exhibition and are featured in videos throughout the exhibition. Several also wrote essays for the exhibition companion publication.

Public programs include “From the Field – International Archaeologists in Conversation” at 6 p.m. on April 24 and a full-day symposium entitled “Trans-Saharan Exchange and the Global Medieval: Visual and Cultural Studies Research at the Crossroads of Disciplines and Regions” hosted by Northwestern’s department of art history and The Block.

“While ‘Caravans of Gold, Fragments in Time’ focuses on a past that may seem remote, it could not be more timely or more relevant to the Block’s mission — to be a place in which art is a spring­board for discussion of issues and ideas that matter now,” said Lisa Corrin, the Ellen Philips Katz Director of the Block Museum.

“We are honored to have these preeminent archaeologists assembled at the museum to share their new research with the public and with one another, research that urgently asks us to ques­tion our assumptions about Africa and its place in history,” Corrin said.

“‘Caravans of Gold’ makes the past tangible through rare frag­mented remains that were excavated from key archaeologi­cal sites around the Sahara, sites that were once thriving cities and towns involved in long distance commerce,” said exhibition curator Kathleen Bickford Berzock, the Block Museum associate director of curatorial affairs.

“The groundbreaking work of these archaeologists is at the heart of the project. Poring over reports of sites excavated by them, I was struck by the variety of commercial goods taken out of the ground, and by their ties to far-reaching networks of exchange that stretched in multiple directions,” Berzock said.

View the video interviews below to learn more about the current research of the visiting archeologists.

Abidemi Babatunde Babalola is the Smuts Fellow at the Centre of African Studies, University of Cambridge, UK. His focus is on sub-Saharan glassmaking in the medieval period.

Mamadou Cissé  is the chief of the Cultural Mission of Kangaba, a branch of the Direction nationale du patrimoine culturel of Mali. Cissé’s research and field work has focused on the ancient site of Gao, a city located in the region of the Middle Niger that participated in medieval trade.

Mamadi Dembélé is director of archaeological research and head of the department of history and archaeology of the Institut des sciences humaines, Bamako, Mali.  Dembélé has researched medieval urbanization and trade networks in the Inland Niger Delta.

Abdallah Fili is a professor of history and Islamic archaeology at the Université Chouaib Doukali d’El-Jadida, Morocco and co-director of archaeological research at Igiliz (2004–present) and Aghmat (2005–present). Fili has conducted field work in the medieval Moroccan site of Sijilmasa, exploring the trading hub’s role in the African gold trade.

Ronald A. Messier is co-director of the Moroccan-American Archaeological Project in Aghmat, Morocco and professor emeritus in the department of history at Middle Tennessee State University, Murfreesboro. Messier has conducted extensive research into documenting the African gold trade in Morocco through the archaeological record.

Sam Nixon is curator of Africa in the Department of Africa, Oceania and the Americas at the British Museum. His work has included fieldwork at the site of Essouk-Tadmekka in present day Mali, a southern Saharan center of the early Islamic Caravan trade.

The archaeologists will participate in a number of campus conversations during their week at Northwestern, including visits with the department of anthropology and the program of African studies to discuss current issues in the field of archaeology, expansion of research within medieval African archaeology, the challenges of African field-work and potential alignments in discoveries from diverse sites.

They also will participate in an interdisciplinary workshop for undergraduate and graduate students and faculty from across departments including English, comparative literature, poetry and poetics, performance studies, material sciences and design. The program will foreground the ways in which archaeologists can draw far-reaching connections from localized and fragmentary material remains.

During the week the scholars will visit local public schools, joining students in classroom discussions about the science of archaeology and how archaeologists learn about the long history of African trade.

For K to 12 education resources and more information on the exhibition, visit the “Caravans of Gold” companion website.

The Block Museum, the department of anthropology and the Program of African Studies present a special opportunity for the public to hear from the six international archeologists whose excavations in Mali, Morocco and Nigeria were fundamental to the shaping of the “Caravans of Gold” exhibition. Curator Kathleen Bickford Berzock will moderate a conversation with the scholars that includes insights into the excavation process, the “archaeological imagination” and the protection of cultural patrimony. Register online at The Block Museum website.

On April 26, archaeologists Abidemi Babatunde Babalola and Sam Nixon will be among the participants in a full-day symposium with two panels devoted to methodologies for drawing global perspectives on the medieval period. Hosted by Northwestern’s department of art history and The Block, the symposium is free and open to the public. Topics will include the relationship between art history and archaeology and between African studies and Islamic studies. The keynote program opens with a lecture by Susan Keech McIntosh, Herbert S. Autrey Professor of Anthropology, Rice University. McIntosh has conducted field research and excavations in Mali and Senegal, including at the important site of Jenne-Jeno and has written extensively on the pressing issues of preserving and protecting archaeological heritage and cultural property in Africa. Following her talk, “Caravans of Gold” curator Kathleen Bickford Berzock will join McIntosh in conversation. Registration is requested.

RSVP for both events on the Weinberg College of Arts and Sciences department of art history website.