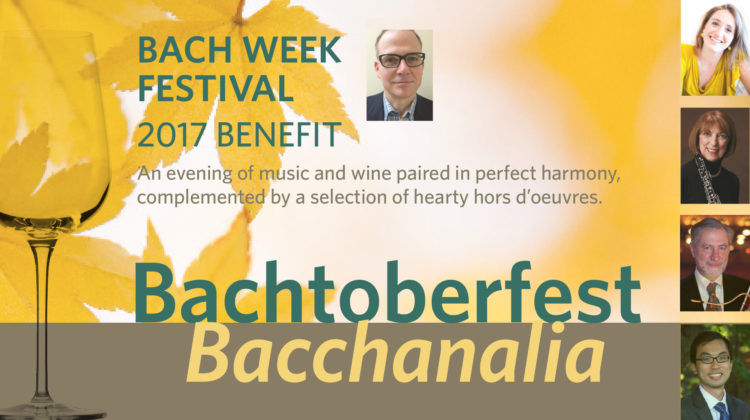 “Music of five fantastic composers, spanning the entire Baroque era, will be matched with specially selected bottles of the beverage beloved by Bacchus, Roman god of wine,” says Richard Webster, Bach Week’s longtime music director and emcee for the fundraiser. “Spirits will be high.”

Performers will be soprano Josefien Stoppelenburg, oboist Judith Kulb, bassoonist Lewis Kirk, and harpsichordist Jason Moy. Stoppelenburg has sung at the Arizona Bach Festival and Boulder Bach Festival and with Chicago’s Rembrandt Chamber Players and Third Coast Baroque. Kulb is principal oboist with the Lyric Opera of Chicago Orchestra, where Kirk is assistant principal bassoonist. Moy is principal keyboardist with the Bach Week Festival Orchestra and a frequent guest artist with Music of the Baroque and other ensembles.

Mike Baker, an Advanced Sommelier in the Court of Master Sommeliers and lead buyer for Vin Chicago, will select wines that echo the personality of each musical work. In addition to consulting with harpsichordist Moy about the character of the pieces, Baker will listen to recordings and research the music before selecting the wines. He’ll discuss each wine before it’s poured for guests.

Along with imbibing the wines chosen to accompany the musical works, guests can dine on hearty hors d’oeuvres, including German delicacies.

A silent auction will offer original artwork, admission to wine-tasting events, and other items for music, art, wine, and food aficionados.

On the morning of the benefit, Bach Week’s Webster will run in the Chicago Marathon to raise funds for the annual spring music festival. Webster has led Bach Week since 1975 and performed in and helped organize the 1974 inaugural festival in Evanston. He is currently director of music and organist at Boston’s historic Trinity Church on Copley Square.

Bach Week Festival concerts will take place in April and May at Nichols Concert Hall in Evanston and at Anderson Chapel at North Park University, Chicago. The festival is a collaboration between Bach Week and North Park’s School of Music, Art, and Theatre.