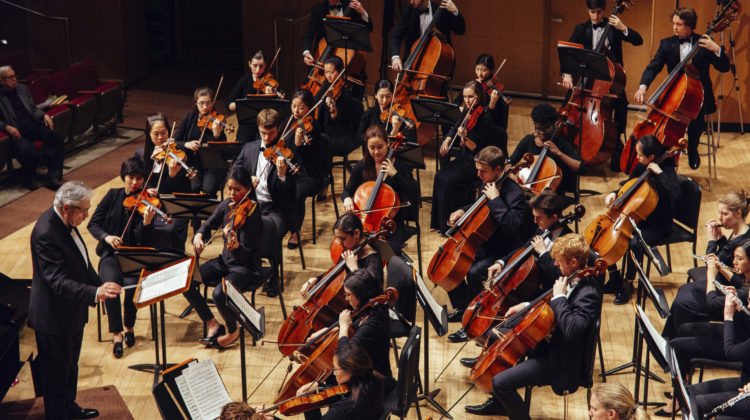 Northwestern University’s Henry and Leigh Bienen School of Music announces two performances of “Twilight of an Empire,” a concert program that includes Sergei Rachmaninoff’s “The Bells” and Sergei Prokofiev’s Symphony No. 2 in D Minor, presented by the Northwestern University Symphony Orchestra, University Chorale and Apollo Chorus. These two distinctly different works mark a turning point in music history — the end of the Romantic era and the dawn of modern 20th-century music.

The concerts will be presented Saturday, May 26, at 7:30 p.m. at Pick-Staiger Concert Hall, 50 Arts Circle Drive in Evanston, and Sunday, May 27, at 6:30 p.m. at Jay Pritzker Pavilion in Chicago’s Millennium Park, 201 East Randolph St. Both events are free and open to the public.

Rachmaninoff’s “The Bells,” written in 1913, is widely considered one of the Russian composer’s choral masterpieces. The lyrics of the piece are borrowed from the poem of the same name by Edgar Allan Poe. The performance will be presented in English. “The Bells” is played in four movements, each following one of the four stanzas in Poe’s poem: “The Silver Sleigh Bells,” “The Mellow Wedding Bells,” “The Loud Alarm Bells” and “The Mournful Iron Bells.” The piece traces the arc of life from birth to death, beginning with a light, jubilant tone and ending with a sense of grief and mourning.

Prokofiev wrote his Symphony No. 2 in D Minor while living in Paris in 1924 and 1925. The piece premiered in Paris on June 6, 1925 and was initially met with sharp criticism and neglect. However, decades later, the piece became regarded as one of the composer’s most challenging and rewarding works. Prokofiev’s Symphony No. 2 unfolds in two movements — the first an allegro in traditional sonata form, and the second a complex series of variations on a melancholy theme. Prokofiev described the piece as a work of “iron and steel.”

For more information on these performances and other events this spring, call 847-491-5441 or visit www.concertsatbienen.org.