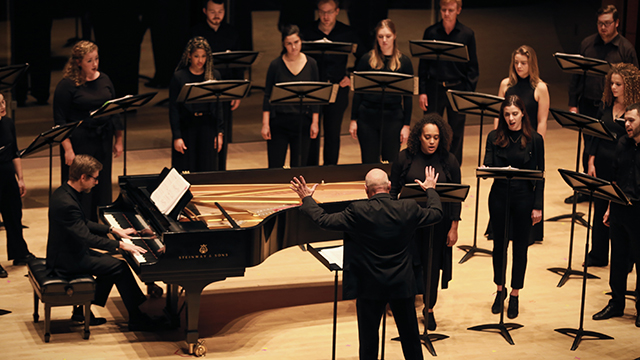 During their visit, the composers will coach the Bienen Contemporary/Early Vocal Ensemble, University Chorale and Northwestern University Symphony Orchestra in preparation for the April 27 Midwest premieres of two of their works. Little also will meet and converse with the cast of his opera “Dog Days,” to be performed by Northwestern Opera Theater in fall 2019.

Other events presented by the Institute for New Music this spring include a residency by the Mivos Quartet and performances by the Contemporary Music Ensemble, Bienen Contemporary/Early Vocal Ensemble and University Chorale.

Founded in 2012 and directed by Hans Thomalla, the Institute for New Music functions as the nerve center of all contemporary music activities at the Bienen School of Music. It presents numerous events over the course of the academic year — from residencies of visiting ensembles and composers to workshops, lectures and masterclasses, to the biennial Conference/Festival NUNC! Additionally, the Institute provides a platform for new music activities for all areas of the Bienen School and Northwestern.

Composer David T. Little has earned widespread acclaim for his operas “Dog Days,” “JFK” and “Vinkensport” (librettos by Royce Vavrek), as well as his monodrama “Soldier Songs.” His music for orchestra, choir, string quartet and contemporary ensemble has been premiered by the London Sinfonietta, eighth blackbird, the Kronos Quartet and The Crossing. He is developing a new opera with librettist Royce Vavrek, commissioned by the Metropolitan Opera and Lincoln Center Theater new works program, as well as the music theater work “Artaud in the Black Lodge” with poet Anne Waldman for Beth Morrison Projects.

Composer Judd Greenstein writes for a variety of instrumentalists and soloists, blending multiple styles, sounds and influences. His music has been commissioned and performed by new-music groups including yMusic, Roomful of Teeth and NOW Ensemble, as well as such institutions as the Minnesota Orchestra, Lucerne Festival and the North Carolina Symphony. In 2020, Greenstein will relaunch The Yehudim, an ensemble of singers, percussionists, keyboards and guitars that explores Biblical subjects through a contemporary lens.

The two composers will discuss their works “Am I Born” (Little) and “My City” (Greenstein) before their performance by the Northwestern University Symphony Orchestra with conductor Donald Nally. Admission is free.

Donald Nally conducts the Bienen Contemporary/Early Vocal Ensemble, University Chorale and Northwestern University Symphony Orchestra in the second of two spring performances devoted to American composers. (The first, featuring music of Samuel Barber, Christopher Rouse and John Corigliano, takes place Friday, April 12 at 7:30 p.m. in Pick-Staiger Concert Hall.) The program is devoted to the Midwest premieres of two works, which have their origins in Brooklyn. David T. Little’s “Am I Born” is inspired by the Francis Guy painting “Winter Scene in Brooklyn” and draws on the hymn “Idumea” composed by Ananias Davisson with lyrics by Charles Wesley to create a dialogue between soprano and choir that asks, “Am I born to die?” Judd Greenstein’s “My City” celebrates Walt Whitman’s 200th birthday in a cosmopolitan romp combining his iconic poems “Mannahatta” and “Crossing Brooklyn Ferry.” In Greenstein’s work, both poetry and music capture the present and imagine the future. Tickets are $12 for the general public and $6 for full-time students with valid ID.

Alan Pierson, Ben Bolter and Victor Huls conduct a program featuring the U.S. premiere of “Trois études mécaniques” (Three Mechanical Etudes) by Philippe Hurel; “a visible trace” by Rebecca Saunders; “Common Fate” by Tyondai Braxton; and a new work by Zoe Morfas. Tickets are $6 for the general public and $4 for full-time students with valid ID.

Donald Nally conducts a program with a theme of waiting, longing and hope, featuring Kile Smith’s “The Waking Sun” and Ted Hearne’s “Fervor,” interspersed with early music of Bach, Tompkins and Marenzio. Tickets are $8 for the general public and $5 for full-time students with valid ID.

Alan Pierson, Ben Bolter and Victor Huls conduct a program featuring arrangements of Aphex Twin’s “Cock/Ver10,” “Gwely Mernans” and “Omgyjya Switch 7”; “Music in Similar Motion” by Philip Glass; “Pranam II” by Giacinto Scelsi; and a new work by George Papajohn. Tickets are $6 for the general public and $4 for full-time students with valid ID.

Tickets are available online at concertsatbienen.org, by phone at 847-467-4000 or in person at the Bienen School ticket office, located at the southeast entrance of Pick-Staiger Concert Hall, 50 Arts Circle Drive.

Ticket office hours are 10 a.m. to 6 p.m. Mondays through Fridays and noon to 3 p.m. Saturdays.