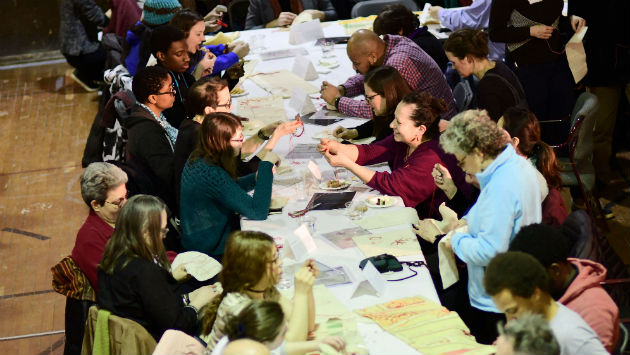 Evanston artist Melissa Blount was long drawn to the work of Gee’s Bend Quiltmakers, African-American women who, dating back to the early 20th century, have been making quilt masterpieces in a small, remote black community in Alabama, where most residents are descendants of slaves.

With the Gee’s Bend quilters in mind, Blount decided to join an “Equity Sewing Circle” hosted by the Block Museum of Art at Northwestern University and contemporary artist Marie Watt.

Watt, a Seneca artist whose work is often created in conjunction with community, invited participants from Northwestern, Evanston and Chicago to join her for conversations about social justice and to contribute to a project reflecting that dialogue.  Overall, more than 300 local residents contributed stiches to the artwork, which became part of the Block Museum exhibition “If You Remember, I’ll Remember.”

The sewing circle at the Block.

Featuring work by seven contemporary American artists, the Block exhibit, which ran February through June, explored the nation’s past and posed questions about the responsibilities of remembering.

Participating in Watt’s equity sewing circle was transformational for Blount, a licensed clinical psychologist, and became pivotal to her decision to form a sewing circle of her own to honor black lives. Blount envisioned a project that would combine Watt’s practice of uniting community in conversation with the visual aesthetic and social tradition of the Gee’s Bend Quiltmakers with whom she studied in 2016.

The energy around the Black Lives Matter campaign that Blount was working on in the spring of 2015, distributing yard signs throughout the community, further crystalized her desire to put her artistic impulses into quilting.

Finished in June, Blount’s first Black Lives Matter Witness Quilt memorializes the deaths of black women and girls in Chicago from January 2016 to May 2017.  Blount intends to continue the project through the year and perhaps longer. 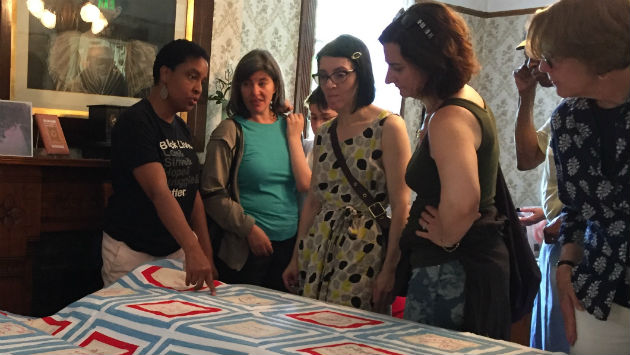 “I wanted participants and viewers to reflect on both the gender and the sacredness of their lives,” Blount said. “Their lives mattered. They are not statistics.”

The theme of the quilt references Blount’s response to a work by her artist husband, Ben Blount, titled “275 Holidays,” a chronicle of the number of black men killed in Chicago in 2016 with the dates of their deaths. The “275 Holidays” piece was part of Ben Blount’s exhibit “Recollection,” recently displayed at 1100 Florence Gallery in Evanston.

The absence of women in “275 Holidays” prompted Melissa Blount to research the number and causes of deaths of black women and girls in Chicago in 2016. 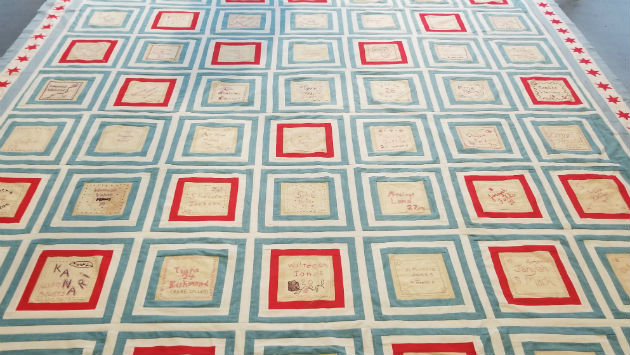 Blount says it was important to track not only the women’s names, ages and dates of death but also the geographic location and circumstances because those highlight the social context that leaves these women vulnerable.

“Marie Watt was definitely an influence on my project,” Blount said. “She helped put the puzzle together for me. And while participating in her sewing circle, I got to experience how quickly participants bonded with one another.”

“I was sorry I didn’t get to thank Marie in person for the inspiration, but she knows about this project,” Blount said. “I’ve been tagging her on Instagram to show her how the community of Evanston has been inspired by her work, and I would love for Marie to see this project in person some day.”

Ben Blount is photographing the project for a book that will accompany the quilts. When the quilts are complete, Melissa Blount hopes to take them as many places as possible.

“I want to take this project into Chicago so the women, mothers and babies of the women lost will know they are remembered and engage with it.”

The next Evanston Black Lives Matter Witness Quilt sewing circle will be held in August. To participate, email Melissa Blount or follow her on Instagram @BeingBlount.