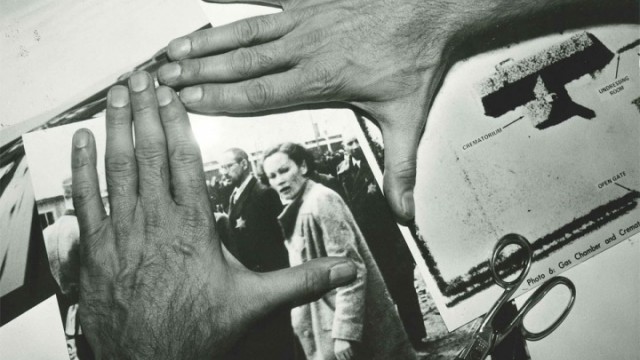 Over the course of his career, German documentary filmmaker and essayist Harun Farocki (1944-2014) created more than 100 bold, playful and cerebral films, videos and installations. His astute and brilliant observations of the contradictions of German society, politics and economics, and how these national issues are situated in a global context, quickly distinguished him as a passionate and critical voice in world cinema.

The free film series “Inextinguishable Fire” will be presented by the Block Museum of Art at Northwestern University from Feb. 9 to March 8 in partnership with the department of German at Northwestern and the Goethe-Institut Chicago. Curated by Anna Parkinson and Jan Behrs of the department of German, the series provides a concise introduction to the work of this prolific artist through a cross-section of his films, from his rebellious 1960s agitprop short films to later works critiquing the media, consumerist society and representations of war.

Through their formal inventiveness, Farocki’s films challenge our usual understanding of the phenomenological and ideological conventions of cinematic representation. The series showcases an artist whose insatiable curiosity and relentlessly skeptical views on German and international politics and society are already sorely missed only four years after his death.

“With his attention to the ways in which daily reality is both produced and obscured through media technologies, Farocki’s films stage a vigilant practice of reading the political and historical traces embedded in our present,” said Anna Parkinson, curator and associate professor of German. “Farocki’s work demonstrates both the critical potential and the powerful seduction of the image as a site of political engagement with the world.”

The screenings will be presented at the Block Cinema, 40 Arts Circle Drive on the Evanston campus. For more information visit the Block Museum website or call 847-491-4000.

The “Inextinguishable Fire” screening schedule is as follows:

This program features several of Farocki’s earliest films, made at a time when his work was at its most overtly political. “The Words of the Chairman (Die Worte des Vorsitzenden)” is an agitprop commercial that demonstrates how words can be weapons as it skewers the Shah of Iran and his wife, who are presented as cartoonish figures. “Their Newspapers (Ihre Zeitungen)” grew out of the student protests against the Springer press group, whose newspapers were being criticized for their bias. “White Christmas” uses the iconic Bing Crosby song in a denunciation of the Vietnam War. One of Farocki’s most celebrated films and a masterpiece of essay filmmaking, “Inextinguishable Fire (Nicht Löschbares Feuer),” concerns the manufacture of napalm, issues of labor and accountability, and the social, political and corporate structures that normalize the horrors of war.

The two films in this program exemplify one of Farocki’s frequent interests: the capitalist and corporatist production, marketing and consumption of goods and services. These films and others look at the systems and structures of local and global economies to reveal the careful constructions of creating and then meeting consumer demands. “A Day in the Life of a Consumer (Ein Tag im Leben der Endverbraucher),” is a collage work made from 40 years’ worth of advertising films. It constructs a humorous “day in the life” of average consumers. “The Creators of the Shopping Worlds (Schöpfer der Einkaufswelten),” is an observational look at the planners, managers, analysts and others involved with designing shopping malls. Customer behavior, human traffic flow, impulse buying and other aspects of retail experience are identified, studied and managed to maximize profit.

The ways in which reality is shaped by media is the connecting subject of these two works. In the short “Catch Phrases Catch Images: A Conversation with Vilem Flusser (Schlagworte Schlagbilder: ein Gespräch mit Vilem Flusser),” Farocki interviews the noted philosopher Flusser about the design of the front page of the tabloid newspaper Bild Zeitung and about how image and text are inseparable and are used to shape meaning. For “Videograms of a Revolution (Videogramme einer Revolution),” Farocki collaborated with Romanian writer Andrei Ujica. The film is an exploration of the 1989 overthrow of Romanian leader Nicolae Ceaușescu, drawn from broadcasts of the state television station (which demonstrators had taken over and were using to televise images of the ongoing revolution) and from footage shot by amateur videographers all over Bucharest. The images of the revolution helped shape the revolution itself, and any later understanding of these events is unavoidably shaped by these mediated images.

The limitations of historical memory and the insufficiency of historical documentation to accurately reflect history are at the center of these two films that focus on war. In “Respite (Aufschub),” Farocki charts the transformation of the WWII Dutch refugee camp, Westerbork, first into a Nazi-controlled “transit” camp for Jewish prisoners on their way to concentration camps and then into a prison work camp after the majority of Jews in the Netherlands had been deported. Traces of documentation both hide and reveal the dark history of the place. The invisibility of, or the unwillingness to see, the visual evidence of the Auschwitz concentration camp in WWII American aerial reconnaissance photographs of the IG Farben factory is the subject of Farocki’s masterful “Images of the World and the Inscription of War (Bilder der Welt und Inschrift des Krieges).” Farocki constructs an elegant, thoughtful essay-film on the nature of images, the creation of knowledge and the ways in which violence is often secretly inscribed in seemingly innocuous places.