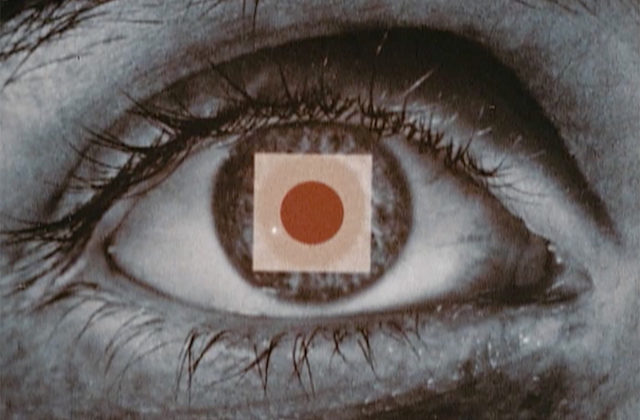 EVANSTON, Ill. — Chicago-area advertising firm Goldsholl Design Associates, headed by husband and wife Morton and Millie Goldsholl, introduced the principles of Bauhaus design to the American public through their innovative campaigns for corporations like 7UP, Motorola and Kimberly Clark.

Although they were compared to some of the most celebrated design firms of the day, the Goldsholls and their designers are relatively unknown today. Yet their work elevated Chicago’s pivotal impact on American design.

The Block Museum will reexamine the innovative work of the firm and its national impact from the mid-1950s through the 1970s with the exhibition “Up is Down: Mid-Century Experiments in Advertising and Film at the Goldsholl Studio” The exhibition will run Sept. 18 to Dec. 9 at the Block Museum, 40 Arts Circle Drive on the Evanston campus.

Block Museum’s “Up is Down” exhibition will be presented in conjunction with the Terra Foundation for American Art’s Art Design Chicago, a spirited, year-long celebration of the unique and vital role Chicago plays as America’s crossroads of art and design, creativity and commerce.

“Up Is Down” is the first major exhibition to explore the trailblazing work of the Goldsholls and their advertising firm, Goldsholl Design Associates which was located Northfield, Illinois.

Beginning in the 1950s, Goldsholl Design Associates made a name for itself with innovative “designs-in-film,” applying techniques of experimental and avant-garde filmmaking to advertisements distributed to a broad audience. The studio worked at the cross-section of art, design, advertising and visual culture, producing television spots, films, trademarks, corporate identities and print advertisements for the National Football League, Revlon and Motorola.

“The Block has taken to heart the mission of the Terra Art Design initiative to encourage original scholarship that brings to light a forgotten chapter in our city’s cultural history. The creative impact and influence of this avant-garde firm was significant and has the potential to reframe how we think about Chicago’s central role in American design,” said Lisa Corrin, the Block Museum’s Ellen Philips Katz Director.

“The Goldsholls’ story unites themes that connect art history to the histories of consumer culture and the social purpose of design.”

Studying with a Modern Master

The Goldsholls attended Chicago’s School of Design and were inspired by its founder, the legendary artist and designer László Moholy-Nagy, who incorporated core principles of Bauhaus philosophy into his teaching. Bauhaus design is characterized by an emphasis on abstraction, experimentation, exploration of materials (especially light) and the overriding idea that art can be an agent for social reform. In his curriculum, Moholy-Nagy emphasized motion picture production as “the medium of the 20th century.”

Deeply influenced by Moholy-Nagy’s teachings and the Bauhaus approach, with its ethos of aesthetic experimentation, the Goldsholls fostered a similar attitude among designers working in their firm. Over time, Goldsholl Design Associates became a hub for a generation of Chicago filmmakers, many of whom had also attended the School of Design (later the Institute of Design), working across the fields of documentary, animation, design and experimental film.

A City of Film Experimentation

The Goldsholls’ work grew equally out of the unique moving image and design culture of Chicago. At midcentury, Chicago was known as the “Hollywood” for educational film production, churning out thousands of educational and promotional films each year. By the late 1950s, there were nearly 100 production companies developing promotional films, public relations films, advertising films and industry training films. These were shown in auditoriums, classrooms, factories, department stores and in living rooms through the new medium of television.

Filmmakers worked expansively, producing slide shows, short films and spectacular industry installations in addition to print advertising and other ephemera. The creative work these artists pursued often influenced their commercial productions and vice versa. The Block Museum has partnered with Chicago Film Archives to feature rare films, television ads and other moving images by the Goldsholls and their firm in the exhibition.

“Chicago served as a testing ground, a site where the experimental met the commercial. The vibrant atmosphere of thinking visually through film was part of the culture that made Chicago a fertile ground for the merging of art, experimentation, everyday life and corporate

advertising. Ideas that emerged here gained international currency,” said exhibition co-curator Amy Beste, director of public programs in the departments of film, video, new media and animation; sound; and art and technology at the School of the Art Institute of Chicago.

The exhibition will also highlight prominent advertising campaigns by the firm. Goldsholl Design Associates’ work for Motorola, Kimberly-Clark, IMC and Martin-Senour, established the firm as a leader in the design industry. Other corporate relationships such as their work for Revlon, 7UP, the National Football League and PBS offered opportunities for technical experimentation with light, collage and technology, for which the firm developed its own tools and inventions.

The Block Museum of Art convened a number of lively Goldsholl firm “reunions” as research for the exhibition. Family and past employees convened at the Museum to remember Morton and Millie Goldsholl and the vibrant and fluid culture of the firm into the 1980s. A studio ethos of collaborative creativity marked Goldsholl projects with an openness to collaboration and equity. For its day the firm was remarkably diverse, including placing women in leadership roles. The exhibition will consider the work of these associates, including Thomas Miller, one of the few African Americans nationwide working with major industry clients at the time.

“Inspired by European modernism and especially the integrative approach of the Bauhaus, the Goldsholls practiced a unique hybrid of commercial and independent work. The intersections across media and a belief in the value of experimentation helped redefine the look of everyday visual culture,” said exhibition co-curator Corinne Granof, curator of academic programs of the Block.

Dyja, a third-generation Chicagoan and author of the award-winning “Third Coast: When Chicago Built the American Dream,” will discuss why Chicago was fertile ground for the Goldsholls’ work, and explore the mid-century circumstances that united culture and industry across the city. Exhibition co-curators Beste and Granof will join the conversation with Dyja to share insights into the groundbreaking work of the Goldsholl Associates, tracing its artistic influences, including those of artist and designer Moholy-Nagy and discussing the Goldscholl studio’s lasting design legacy.

Inspired by the exhibition “Up Is Down,” writer and curator Lupton will show how experimental media have transformed commercial design. In the 1950s and 60s, the Goldsholl design firm’s creative explorations of light and media found their way into lucrative television commercials and industrial patents. Lupton will explore pivotal examples of how abstract or speculative practices can critique, predict or transcend the limits of everyday design. From the Bauhaus to “Minority Report” and “Black Mirror,” the strange and alarming visual languages invented by creative artists have the power to melt into daily life. Lupton is curator of contemporary design at Cooper-Hewitt, Smithsonian Design Museum in New York City and director of the graphic design MFA program at Maryland Institute College of Art.

About Block Museum of Art

The Block Museum of Art is a dynamic, imaginative and innovative teaching and learning resource for Northwestern University and its surrounding communities, featuring a global exhibition program that crosses time periods and cultures and serves as a springboard for thought-provoking discussions relevant to our lives today.

Block Museum hours are 10 a.m. to 5 p.m. Tuesdays, Saturdays and Sundays and 10 a.m. to 8 p.m. Wednesdays, Thursdays and Fridays. The Museum is closed Mondays. Admission is free and open to the public.

Art Design Chicago is a spirited celebration of the unique and vital role Chicago plays as America’s crossroads of art and design, creativity and commerce. With a scope and ambition befitting Chicago’s grit and can-do determination, Art Design Chicago shares with the world a dynamic convergence of more than 30 exhibitions and hundreds of public programs in 2018. Together, they tell the stories of the artists and designers that defined and continue to propel Chicago’s role as a hub of imagination and impact.

Art Design Chicago is an initiative of the Terra Foundation for American Art, dedicated to helping people in Chicago and around the world experience, understand, and enjoy America’s extraordinary artistic legacy. The Richard H. Driehaus Foundation is the Presenting Partner of Art Design Chicago.