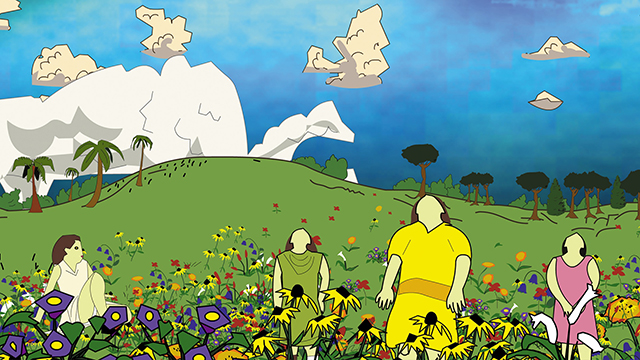 The Block Museum of Art at Northwestern University has announced a new exhibition highlighting a significant gift of media art to its permanent collection. Through Nov. 4, the Block Museum is devoting its first-floor gallery to the media work “Happiness (finally) after 35,000 years of civilization” by contemporary artist Paul Chan.

Paul Chan (b. 1973) is an American artist, activist, writer and publisher. His work addresses relationships between politics and aesthetics, philosophy and popular culture, and art and grassroots activism. These themes figure prominently in “Happiness (finally) after 35,000 years of civilization,” Chan’s first major artwork, which was started in 1999 and completed in 2003. A 17-minute looped Flash animation, “Happiness” is inspired as much by the history of utopian thought and the U.S. invasion of Iraq as by Web 1.0 banner ads.

The exhibition is on view now at the Block Museum, 40 Arts Circle Drive on the Evanston campus.

“The Block Museum is dedicated to exploring the methods of artistic processes, inquiry and innovation,” said Lisa Corrin, Block Museum Ellen Philips Katz Director. “It’s for this reason that we are thrilled to own and exhibit ‘Happiness,’ one of Paul Chan’s earliest and most formative works. This bold animation introduces themes that Chan has continued to mine and expand throughout his renowned career.”

Completed as part of his MFA degree at Bard College, “Happiness” also reflects Chan’s formative undergraduate years at the School of the Art Institute of Chicago, where he first encountered the work of Henry Darger, a self-taught Chicago artist. Darger’s beautiful and violent imagery runs throughout “Happiness,” which also draws on the ideas of the radical 19th-century French socialist Charles Fourier.

Chan animates these sources across an ultra-wide screen, depicting cycles of ecstasy and carnage, and hope and despair. While the work evokes optimism about the expressive and collaborative possibilities of new digital technologies, its avatars of militarism and greed also respond obliquely to the political anxieties of the George W. Bush administration.

“While Paul Chan is internationally recognized, he traces the roots of his artistic education in Chicago,” said co-curator James Hodge, Northwestern assistant professor of English at the Alice Kaplan Institute for the Humanities.

“During this year of Art Design Chicago, when the city celebrates its place as a unique incubator of artistic talent, we are glad to take a renewed look at this artwork that was inspired by his education here,” Hodge said.

A limited-edition work, “Happiness” is part of a gift of 68 works of contemporary art donated to the Block Museum in 2016 by art collector, philanthropist and software innovator Peter Norton. The Block gift is one of a series of gifts Norton has made to university art museums throughout the country. The gifts recognize and support institutions integrating art into teaching and learning across disciplines, fostering creative museum practices and engaging audiences with diverse forms of contemporary art.

The exhibition is funded with support from the Bernstein Family Contemporary Art Fund, the Illinois Arts Council Agency and the Mary and Leigh Block Endowment.

Paul Chan was born in 1973 in Hong Kong and raised in Omaha, Nebraska. He received a BFA from the School of the Art Institute of Chicago in 1996 and an MFA from Bard College in 2002. Solo exhibitions and screenings of Chan’s work have been organized by art museums and film centers throughout the world. His work also has been included in major group exhibitions such as the Carnegie International (2004), Lyon Biennale (2005), Whitney Biennial (2006), Istanbul Bienali (2007), “Art in America: 300 Years of Innovation” at the Shanghai Museum of Contemporary Art organized by the Solomon R. Guggenheim Museum (2007), Sydney Biennial (2008) and Venice Biennale (2009).

Chan was the winner of the 2014 Hugo Boss Prize, and his solo exhibition “The Hugo Boss Prize 2014: Paul Chan, Nonprojections for New Lovers” was presented at the Guggenheim Museum in 2015. Chan lives and works in New York.

Block Museum hours are 10 a.m. to 5 p.m. Tuesdays, Saturdays and Sundays and 10 a.m. to 8 p.m. Wednesdays, Thursdays and Fridays. The museum is closed Mondays. Admission is free and open to the public.

The Block Museum of Art is a member of the Northwestern Arts Circle, which brings together film, humanities, literary arts, music, theater, dance and visual art