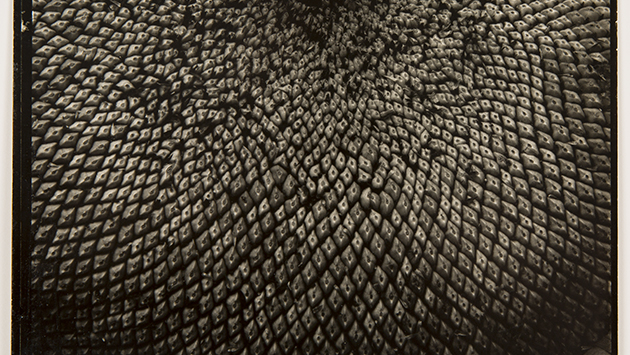 Images ranging from Charlie Chaplin and W.B. Yeats to self-portraits and botanical studies are among 44 Edward Steichen photographs given to Northwestern University’s Mary and Leigh Block Museum by art collectors Richard and Jackie Hollander.

The significant gift of silver gelatin and platinum prints by the Luxembourg-born American photographer Edward Steichen (1879-1973) is the second to the museum from the Hollander family, who donated 49 Steichen prints to the Block in 2013.

Prior to a series of museum gifts to the Block, the Whitney Museum of American Art and the Los Angeles County Museum of Art, the Hollanders held the world’s largest private collection of Steichen photographs, which they purchased directly from the artist’s estate. Adding to the value and importance of the collection, the photographs were printed by the artist himself.

Active throughout the 20th century, Edward Steichen transformed the medium through his innovations in portrait, fashion, theater, horticultural and advertising photography. He became one of the best-known portraitists in the world, focusing on capturing the personalities as well as the impressions of his subjects.

“We are honored by this new and important gift of art from Richard and Jackie Hollander, which recognizes the Block’s increasing prominence as a university art museum committed to teaching with its collections across fields of study,” notes Lisa Corrin, the Block Museum’s Ellen Philips Katz Director. “It highlights the value of the collection as a significant resource for faculty, students and the Chicago-area community. Collectors like the Hollanders know that giving works of art to the Block ensures that these treasures will be studied and appreciated, particularly by new generations of students, for many years to come.”

This group of 44 works represents a significant addition to the Hollanders’ earlier gift of 49 works by Steichen, strengthening the breadth and the depth of the Block’s holdings of photographs by the artist.  Ranging from 1901 to 1935, this collection of photographs showcases the range of Steichen’s early work and the multiplicity of his interests — from fashion, to nature, to self-portrait, dance and movement.

Photographs from the previous gift were exhibited in the 2014 exhibition “Steichen ǀ Warhol: Picturing Fame,” the first exhibition to closely examine the lines of connection between the two photographers. Four Steichen works from the Block collection were loaned to the Art Institute of Chicago for the groundbreaking 2014 exhibition “Sharp, Clear Pictures: Edward Steichen’s World War I and Condé Nast Years.”

While the original gift provided the museum with iconic celebrity images from the artist’s best-known years as a Condé Nast photographer, this second set of prints complements and differentiates the first portfolio, speaking to Steichen’s great range as a photographer and shedding light on some of the lesser-known areas of his practice. Of particular interest to scholars will be the horticultural and botanical studies in the collection, which situate Steichen within the mid-20th century movement of abstract photography.

“The Hollanders’ generous gift will provide an excellent tool for critical discussions with students and scholars from many academic departments across the University,” says Kathleen Bickford Berzock, Associate Director of Curatorial Affairs.  “The Hollander’s two major gifts encompass Steichen’s many areas of interest and evolution as a photographer. It will be studied holistically while each print individually offers significant comparative potential for drawing out concepts within the Block’s growing collection of modern and contemporary art.”

About Edward Steichen (1879 – 1973)
Steichen was a key figure of 20th century photography as a protégée and collaborator of Alfred Stieglitz and as the first chief of photography for Condé Nast’s Vogue and Vanity Fair, a position he held from 1923 until 1937.

Steichen became well known for his portrait photography of celebrities and his fashion and advertising photos. A sharpened focus, dramatic lighting and bold compositions characterized his photographs — a departure from the softly focused images of the early 20th century.

With America’s entry into World War II, Steichen volunteered for service and became director of the U.S. Naval Photographic Institute and commander of all Navy combat photography. In 1944, he directed “The Fighting Lady,” an Oscar-winning documentary about life aboard an aircraft carrier during wartime.

After the war, Steichen became the director of photography and an influential curator at the Museum of Modern Art, New York from 1947 to 1962. His most famous exhibition, “The Family of Man,” presented photography as an art form that could act, in Steichen’s words, “as a mirror of the essential oneness of mankind throughout the world.” Steichen received countless awards and honors, including Knighthood in the French Legion of Honor, an Honorary Fellowship in the Royal Photographic Society, the Distinguished Service Medal, the Art Directors Club of New York Award and the U.S. Camera Achievement Award for Most Outstanding Contribution to Photography by an Individual.  In 1963, Steichen received the Presidential Medal of Freedom from President John F. Kennedy in recognition of a lifetime of achievement.