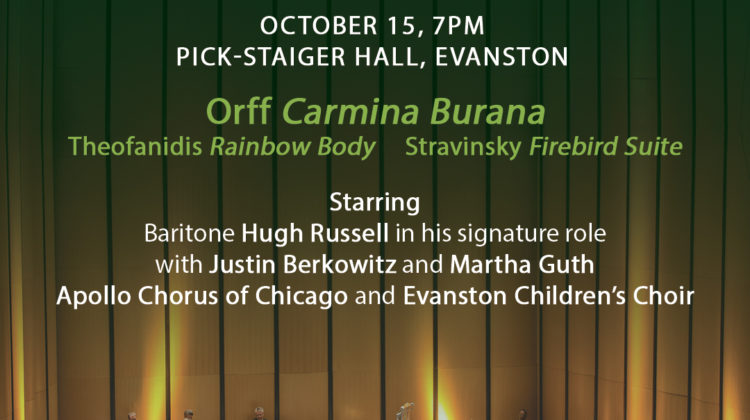 Accompanied by the Apollo Chorus of Chicago and Evanston Children’s Choir, the Chicago Philharmonic opens its 2017-2018 season with Body and Soul, featuring the renowned Carmina Burana by Carl Orff. Inspired by a collection of medieval poems, Orff explores the earthly experiences of fortune and fate: journeying from the village green bursting with life and the joyful return of spring, to the pleasures in the tavern and the perils of the court of love. Alongside the Apollo Chorus, the oldest musical organization in Chicago, and Evanston Children’s Choir, soloists Martha Guth, Hugh Russell and Justin Berkowitz provide sensational vocals. Guth, Russell and Berkowitz all have a celebrated history of performing Orff’s towering choral masterpiece, performing it alongside over 20 different orchestras between them. Join the Chicago Philharmonic as we turn the wheel of fortune, joy becoming bitterness and grief turning to hope.

In Rainbow Body, recognize the celestial energy of the enlightened person as portrayed in music. Theofanidis merges together his love of medieval mystic and visionary Hildegard von Bingen’s music and his fascination with the Tibetan Buddhist philosophy of ‘The Rainbow Body’ which believes that when an enlightened being passes, their body is absorbed back into the universe as energy, as light.

And finally, marvel at the beautiful music of Stravinsky’s mythical bird in Firebird Suite. Based on a Russian fairy tale about a magical bird, the possession of which can be both a blessing and a curse, the suite was the first original score written for Sergei Diaghilev’s Ballet Russes and became Stravinsky’s breakthrough hit.