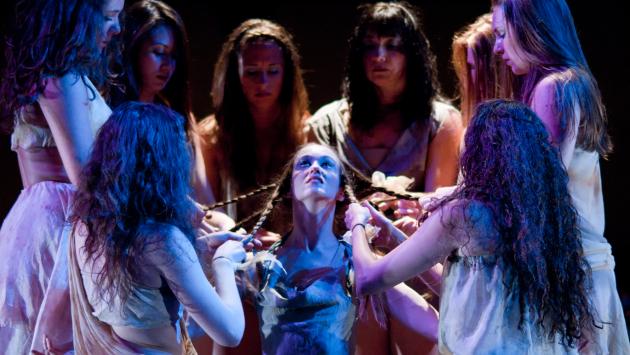 The Chicago Philharmonic opens its 2013-2014 season “The Romantic Impulse” with a Sunday evening concert titled “Twilight of the Romantics” on September 29 at 7 p.m. at Pick-Staiger Hall in Evanston.

Artistic Director Scott Speck will lead the Chicago Philharmonic through the Romantic era beginning with Strauss’ thrilling Don Juan.  Soloist Kuang-Hao Huang will perform the rarely heard, one-movement Piano Concerto No. 3 of Pyotr Ilyrich Tchaikovsky.   Discover this lesser-known masterwork of one of the world’s most beloved composers.   The orchestra will then celebrate the centennial of Igor Stravinsky’s landmark ballet The Rite of Spring which changed the history of music forever.

As a special treat for the audience, the Agnieszka Laska Dancers, a ground-breaking modern dance troupe from Oregon, will pay tribute to the centennial by performing selected scenes from the original choreography of The Rite of Spring.   The new season offers an exciting new twist for our audience.  Each concert features a surprise component that incorporates a different art form.

This season also marks the beginning of a new era, as we welcome Scott Speck as the Chicago Philharmonic’s new Artistic Director.   Scott Speck, also Music Director of the Joffrey Ballet, brings his experience and sensibilities to our orchestra’s programming.

“I am thrilled to begin this new chapter with the Chicago Philharmonic,” said Scott Speck.   “Even for a city with the riches of Chicago, these musicians are especially superb, and our collaboration holds huge promise.   This is an orchestra that takes my breath away, and we have created an opening season that plays to its great strengths.”

Our 2013-2014 Season Continues
The Chicago Philharmonic continues its season with Romantic Serenade on Sunday, November 10, 2013 at 3:00 p.m. at Nichols Concert Hall in Evanston.  The orchestra welcomes back to the podium perennial favorite and masterful conductor Joel Smirnoff.  Maestro Smirnoff leads a diverse program opening with the beautiful sound of CPO concertmaster David Perry’s violin in Hector Berlioz’s Rêverie and Caprice.   The intense pathos and introspective Romanticism of Richard Strauss’ orchestral work, Metamorphosen, ignite the flames of romance.  Concluding this concert is Johannes Brahms’ Second Serenade for Orchestra.  This unique chamber orchestra work focuses heavily on violas.  Brahms relies on the darker timbre of the lower strings and winds, yet there still remains the unmistakable Romantic charm of the 19th century.  In a stimulating discussion, Northwestern University musicology professor Jesse Rosenberg illuminates the cultural and musical worlds of the Romantic Era, a special enhancement to the typical concert experience.

On February 16, 2014 at 3:00 p.m. the orchestra presents Romantic Remix at Nichols Concert Hall in Evanston.  This concert, consisting of music taken from other sources, is the pinnacle of Romantic expression.  Scott Speck returns to conduct Siegfried Idyll, Richard Wagner’s surprise birthday gift to his wife. Wagner awoke his wife Cosima with this work, played by a chamber orchestra on the stairs of their home, incorporating themes from his opera Siegfried.  Gustav Mahler’s music is among the most stirring of the Late Romantics.  His Rückert Lieder were based on the poignant poetry of Frederick Rückert, which affected Mahler greatly.  These songs are performed by the brilliant, creamy-voiced mezzo-soprano Susan Platts. Next are two different interpretations to Molière’s play/ballet Le Bourgeois Gentilhomme. First we hear themes by Jean- Baptiste Lully, who wrote the original music for the work in 1670. Next, we hear these same themes in a very different take on this satirical comedy by Richard Strauss.  Actors from the Chicago's renowned Court Theatre perform spirited excerpts  Le Bourgeois Gentilhomme, making connections between the play and the music of Lully and Strauss.

In April, Romance goes abroad with guest conductor Leif Bjaland in Passport to Passion on Sunday, April 13, 2014 at 7:00 p.m. at Pick-Staiger Hall in Evanston.  Bjaland takes you to England where Ralph Vaughan Williams’ Fantasia on a Theme by Thomas Tallis makes your heart soar with its warm string sonorities. Next, Lyric Opera’s Principal Harpist Marguerite Lynn Williams is your guide to France, transporting you with her mastery on Camille Saint-Saëns Morceau de Concert. Finally we arrive in Bohemia where the Czech Romantic master Antonín Dvo?ák reigns supreme.  His Seventh Symphony takes you on an emotional journey through the human spirit.   Pensive, exuberant, melancholy, reflective, celebratory… All of these feelings are encompassed in this soaring work.  As a special bonus, Art Historian Jeff Nigro of the Art Institute of Chicago takes us on an illustrated journey through paintings evocative of the lush Romantic music on this program.

About the Chicago Philharmonic
The Chicago Philharmonic Society is a musician-governed and driven Chicago-based not-for-profit organization originally established in 1988 by the principals of the Lyric Opera Orchestra.   Over the years, the core group of Lyric players has expanded to become a community of over 200 professional musicians, which form the artistic strength of the Chicago Philharmonic Orchestra.   Previous conductors have included Zubin Mehta, Sir Andrew Davis, Itzhak Perlman, Jesus Lopez-Cobos, Erich Kunzel, and former Music Director Larry Rachleff.   Throughout the years, the Orchestra has also performed at Ravinia as the Festival Orchestra under the baton of James Conlon and Christoph Eschenbach, among others.