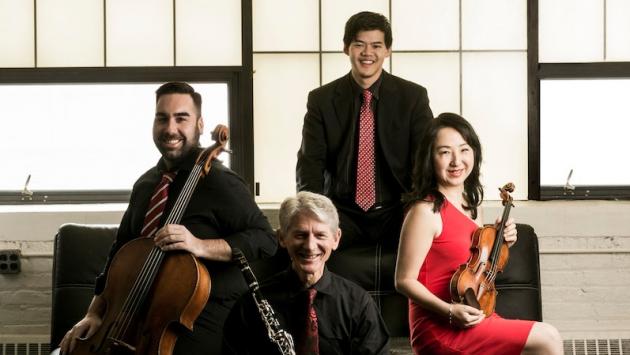 Civitas Ensemble, a non-profit chamber music group based in Evanston, is pleased to announce its line-up for the 2015-2016 season, starting with the kick-off concert on Friday, Oct. 16 at 7 p.m. at Gottlieb Hall at the Merit School of Music, 38 S. Peoria St., Chicago. Tickets are $30, and only $20 if purchased before Sept. 18. Student tickets are free.

Civitas is made up of three members of the Chicago Symphony Orchestra — Yuan‐Qing Yu, violin and assistant concertmaster; Kenneth Olsen, assistant principal cello; and J. Lawrie Bloom, clarinet and bass clarinet. The fourth member is Winston Choi, head of the Piano Department at Roosevelt University’s College of the Performing Arts.
Civitas’ Oct. 16 concert, entitled “Inspiration,” will feature works by three living composers along with the beloved Clarinet Quintet by Brahms, fulfilling Civitas’ mission to explore new works as well as continue to celebrate tried and true classical pieces.

The program will include:

Civitas Ensemble’s other 2015-2016 concerts will include a performance on Feb. 28 at 3 p.m. and a performance on May 1 at 3 p.m., both at the Merit School of Music. Stay tuned for more information about programming and ticket details.

During the season, Civitas also will perform on June 5 at 2 p.m. at the Art Institute as part of the Chicago Symphony Orchestra’s Chamber Series, and will continue to perform several concerts as Ensemble-in-Residence at Valparaiso University.  The Ensemble’s community engagements at various retirement centers and hospitals are ongoing.

TICKETS: $30, $20 if purchased by Sept. 18. Student tickets are free. Purchase tickets at http://www.civitasensemble.org/

ABOUT CIVITAS ENSEMBLE
Civitas Ensemble was founded by members of the Chicago Symphony Orchestra in 2011. The ensemble presents repertoire spanning four centuries of music history and also nurtures relationships with living composers to introduce audiences to exciting new works.

Civitas has performed at various venues, including the Pritzker Pavilion in Millennium Park and with Yo-Yo Ma at the 2012 Chicago Humanities Festival. The group’s performance on WFMT was selected by the station as the one of the “Best of Live Broadcasts in 2012,” and the ensemble has received rave reviews from the Chicago Tribune, Chicago Classical Review, and Chicago on the Aisle.

Civitas Ensemble is the recipient of grants from the Driehaus Foundation MacArthur Arts Fund, the Albert Pick Jr. Fund, the Leslie Fund, the Dolores Kohl Educational Fund, The Sage Foundation, the Aaron Copland Fund for Music, the Illinois Arts Council, and is supported by Judith and Scott McCue and the Elizabeth F. Cheney Foundation.