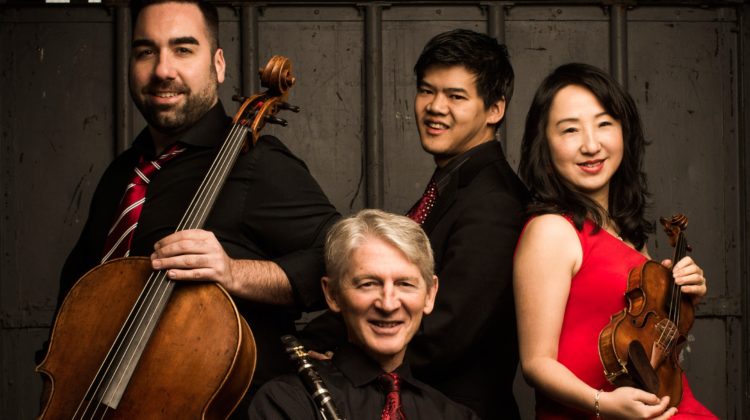 Civitas Ensemble, a non-profit chamber music group based in Evanston, is pleased to announce the program line-up for its 2017-2018 season.

This year, the ensemble explores music by French composers, including an exploration of the many ways that Russian culture and writers influenced them, and an all Debussy program on the 100th anniversary of his death. In the winter the ensemble revisits the Czech chamber music repertoire, while in the spring Civitas continues its focus on cross-cultural collaboration with a program of works by living Chinese and Chinese-American composers, performed with visiting artists from Beijing.

Civitas returns as an Ensemble-in-Residence at Valparaiso University, as well as performing a series of outreach concerts at hospitals, senior living communities and other institutions.

Fall concerts in Chicago and Valparaiso explore the complex and compelling Russian influences, both social and cultural, on French composers over time. A spring concert at Valparaiso honors the 100th anniversary of Debussy’s death and the final concert at Chicago’s Merit School of Music circles back to a celebration of beloved French works.

An afternoon with Dempster St. Pro Musica, at SPACE in Evanston, features Czech repertoire, which was central to Civitas’ year-long collaboration with Czech violin superstar Pavel Šporcl and the Gipsy Way Ensemble last season. Musicians from both Civitas and Dempster St. Pro Musica are colleagues at the Chicago Symphony Orchestra. Both ensembles are based in Evanston.

This year’s international collaboration brings renowned Chinese composer Yao Chen and pipa player Lan Wei-Wei from Beijing for programs at Northwestern University in Evanston and the Art Institute of Chicago for programs devoted to living Chinese and Chinese-American composers.

Civitas is comprised of four artists, three of whom are members of the Chicago Symphony Orchestra — Yuan‐Qing Yu, violin and assistant concertmaster; Kenneth Olsen, assistant principal cello; and J. Lawrie Bloom, clarinet and bass clarinet. The fourth member is Winston Choi, head of the Piano Department at Roosevelt University’s College of the Performing Arts.

An evening of Czech and Romanian chamber music presented in collaboration with Dempster St. Pro Musica. Both ensembles were founded by and include members of the Chicago Symphony Orchestra. Additional repertoire to be announced.

An all-Debussy program to honor the 100th Anniversary of his death.

Merit School of Music, 38 S. Peoria St., Chicago, IL
A celebration of French repertoire, with guest artists to be announced.

Tickets
Tickets for the October 9 and May 27 concerts at the Merit School of Music are $30, Early Bird tickets are $20, and students tickets are free with a valid ID. All concerts at Valparaiso University are free. Other ticket prices to be announced by event presenters.

CIVITAS ENSEMBLE MISSION
Civitas is a chamber music ensemble with a threefold mission: to present engaging live performances of new and traditional works; to inspire a young generation of classical musicians; and to bring the healing power of music to those with limited access to live performances.

Civitas Ensemble was founded by members of the Chicago Symphony Orchestra in 2011. The ensemble presents repertoire spanning four centuries of music history and also nurtures relationships with living composers and international artists to introduce audiences to exciting new works. To fulfill the part of its mission to grow and nurture the next generation of classical musicians and music lovers, students with a valid ID may have two complimentary tickets to each of Civitas’ self-presented concerts. Civitas brings the healing power of music to those with limited access to live performances with a series of outreach concerts at hospitals, senior living communities and other institutions.

Civitas has performed at various venues, including the Pritzker Pavilion in Millennium Park and with Yo-Yo Ma at the 2012 Chicago Humanities Festival. The group’s performance on WFMT was selected by the station as the one of the “Best of Live Broadcasts in 2012,” and the ensemble has received rave reviews from the Chicago Tribune, Chicago Classical Review, and Chicago on the Aisle.

Civitas Ensemble is the recipient of grants from the Driehaus Foundation, MacArthur Arts Fund, the Albert Pick Jr. Fund, the Leslie Fund, the Dolores Kohl Educational Fund, The Sage Foundation, the Aaron Copland Fund for Music, the Illinois Arts Council Agency, and is supported by Judith and Scott McCue and the Elizabeth F. Cheney Foundation.