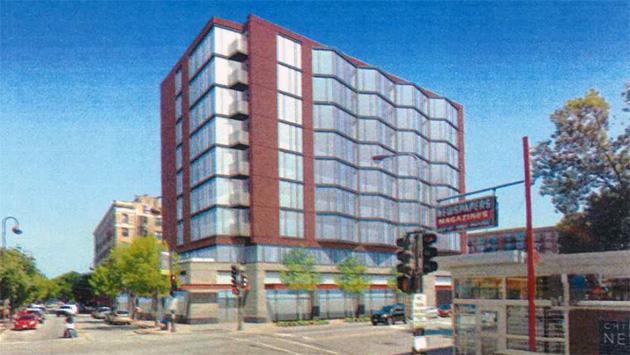 Design Evanston says its members have voted overwhelmingly in support of the proposed mixed-use development at Chicago Avenue and Main Street.

Jack Weiss, president of the group of architects, graphic designers and other design professionals, says the group hosted a project review session on the development late last month that lasted nearly two hours.

Weiss says 88 percent of Design Evanston members present supported the project, designed by Chicago-based GREC Architects, and that no significant objections were expressed.

Weiss says the site is perfect for transit oriented development — with the CTA station literally across the street and the Metra station less than a block away. Pace, CTA and Northwestern buses stop at the intersection and major east-west and north-south bike routes cross there.

He says the group suggested that the city should look into additional implementation of complete streets concepts at the intersection.

But he said the commission should focus on the positive aspects of the development.

Many residents of the Chicago-Main building will choose to use public transportation or bicycles, Weiss says, "thus reducing or even eliminating the need for cars and parking."

And he says Design Evanston is urging the Plan Commission to approve the project.